Following their successful dark “Black Will” album and its club-invader remix extension “Flesh And Will Resurrected”, the apocalyptic Greek duo SIVA SIX opens today a new mysterious sonic gate with their much anticipated new studio album, “The Twin Moons” to be released in June 2011 by Alfa Matrix.

The fruit of two intense and laborious years of studio work, “The Twin Moons” album unlocks new mysteries from the history of mankind and fulfills SIVA SIX’s compelling Hell-prophecy. Combining Protools HD technology and the bombastic recordings of the real orchestras of maestro Chris Antoniou (famous for his work with CHAOSTAR, SEPTIC FLESH…), SIVA SIX offers to us a very strong duality album concept constructed around contrasts and opposites.

Dark elektro and IDM soundscapes embrace EBM and harsh industrial for the ultimate sound of the apocalypse where Earth and Stars become one, where Hell blows up Paradise and men and angels start falling down like flames from the sky in front of the bewitching rise of the Serpent Whore. Failure, vengeance and victory… “The Twin Moons” is the powerful soundtrack of humanity’s apocalyptic descent in the shimmering light of the twin moons reaching its acme on the unexpected cover of Vangelis Papathanasiou’s epic ‘Blade Runner”…

The angel brothers of the night, Z and Herr Khaos, deliver their best album ever and prove that the dark elektro genre still has much to offer when it is taken by the horns. Bringing the sonic experience to an all new level where orchestral arrangements enter in symbiosis with powerful elektro machine sounds led by harsh vocals plunging us in the unique mystic atmosphere of a theatrical setting where both Armageddon and Arthemis hold the strings of the plot. 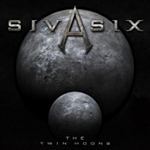