Cult duo SIVA SIX return in full force with their 4th full length studio album, definitely their most diverse album ever, a free dive into the depth of your soul with sound and words as your only companion! An electronic and analog ritual full of dirty, bombastic, apocalyptic and emotional dark electro/industrial from  Athens’ infamous band renown for favoring quality to quantity! And it’s no surprise that it took them 3 years to complete this new chef d’oeuvre since their successful “Superstition” EP…

Besides SIVA SIX’s characteristic harsh dark elektro style, “Dawn Of Days” also takes another sonic dimension by integrating traditional eastern instruments such as oud, yayli tambur or yet theremin played by talented theater musician G. Diamantopoulos (check splendid songs like “Twenty Eight”, “Until Death Reunite Us”, “The Messenger”…) as well as the awesome guitar parts of Boog (JUNKSISTA) on a unique cover version of the “28 Days Later” movie-soundtrack’s main theme.

The eternal confrontation between light and darkness is being fulfilled on “Dawn of Days”, exactly when the dilemma between going up or down becomes your own call… This new album pushes all somber elektro boundaries and carries us into a world of chaos dominated by Death victoriously marching on the Earth under a bloody red sky oppressed by echoing war roars.

Upbeat club tracks like the instant hit “Αποκάλυψις”, the devilish “Daylord” and the unmistakable “Superstition” all carry you straight to hell on Earth, while  “Twenty Eight” lets you suffocate in the center of the pandemonium before “High On Low” confronts you with yourself in front of the mirror of eternity. The album also has its shimmering slower moments on a dramatic lingering (love?) song like “Until Death Reunites Us” or the closing chapter “The Messenger”… From the ass-kicking opening assault of “To The Light” to the album’s enchanting last battle, SIVA SIX escort you on a dark trip through the ultimate battle between good and evil from which only your spiritual power can save you…

SIVA SIX once again emerges from the flood of dark elektro mass productions and proves to us that this music genre still can be more than relevant anno 2016 once you put love, hate, blood and brain in the creative cauldron. Shall you break the spell that bounds your soul and say the words that open the gate? ΑΠΟΚΑΛΥΨΙΣ 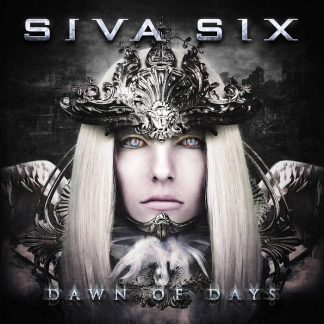