German duo THE PSYCHIC FORCE earned a huge reputation in the early nineties in the dark elektro scene next to bands like YELWORC, AMGOD, PLASTIC NOISE EXPERIENCE, and PLACEBO EFFECT. At the turn of the millennium, Michelle Christiansen and Jörg Charnowski simply vanished from the surface of the Earth. In Summer 2015, EBM/dark elektro veterans THE PSYCHIC FORCE broke some 20 years of extended silence with the successful club-EP “Relapse”. A stunning comeback which reminded us once more of how good the Belgian label Alfa Matrix can be at bringing EBM living legends back into the spotlight like they did it in previous years with PLASTIC NOISE EXPERIENCE, LEAETHER STRIP, AMGOD, ARMAGEDDON DILDOS, POUPPEE FABRIKK or yet MENTALLO & THE FIXER.

With their new full length album “Welcome To ScarCity“ the PSYCHIC FORCE gang unites their old school EBM roots with their personal music spectrum evolution throughout the years, towards more modern and melodic forms of electronics.

A flight forward journey at full speed rolled-out in some 13 songs bringing us to dark oppressive cinematic industrial territories full of sample manipulations (the opening “Welcome To ScarCity”, the lingering “Die In The Clinic”, the upbeat “Painful Revelation” or  the noir “BeDevil”) also haunted by true classic dark elektro tracks with powerful harsh vocals like the cold and engaged SUICIDE COMMANDOesque “Politics Of Greed”, the anti-terrorism EBM assault “Blowback” and the unmatched revamped version of their club-hit “Twilight Zone MMXVI”.

The German duo also sharpened the more melodic side of the band’s work by intelligently adding lighter passages to the album’s diversity where clearer vocals (even sometimes accompanied by Darja’s female backing vocals on 2 songs) and more modern melodic synth lines get fused with their characteristic icy elektro sequences and ripping EBM basslines sometimes evoking bands like LEAETHER STRIP, VNV NATION or even BEBORN BETON (the catchy synth pop fugue “Drive”, the carrying minimal electro-pop “Accelerate”, the introspective and highly emotional “Teach Me” or the transporting robotic and darkish “Neurotic (Relapse)” and the icy blast of “Demons Of Time”). THE PSYCHIC FORCE also add a touch of humour to the album with the intentionally cliché EBM track “Vater EBM” with German lyrics that will bring some fun moments to dancefloors and at their concerts, evoking some kind of harsher “DAF-like” version of AND ONE’s good old tongue-in-cheek “Techno Man” hit…

In short: “ScarCity” offers you a challenging mixture of icy EBM, harsh elektro and catchy synth melodies marking a solid return on the forefront of the dark EBM scene for THE PSYCHIC FORCE nicely rendered by the apocalyptic noir design of n0emi Aurora of Toxic Visions.

To celebrate the band’s return in record stores, the album is also released as a limited deluxe carton box edition with a 12-track bonus CD offering an astounding EBM/dark elektro sonic extravaganza including an exclusive cover version of THE KLINIK’s classic “Someone Somewhere” hit as well as remix works from among others EISFABRIK, AD:KEY, READJUST, ACYLUM, and many more. 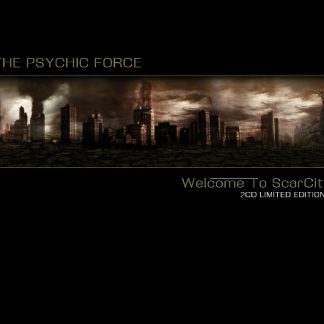 You're viewing: The Psychic Force – Welcome To Scarcity 2CD €17,99
Add to cart