Created in the early 90’s, MILDREDA is actually the first band created by the Belgian artist Jan Dewulf mostly known today under the DISKONNEKTED moniker and its impressive discography.

With last year studio album “Coward Philosophy”, MILDREDA added a killer album to the legacy of the classic 90’s dark elektro genre bringing back to life the sound of bands like PLACEBO EFFECT, NUMB, YELWORC, IN SLAUGHTER NATIVES or even early PROJECT PITCHFORK and also MENTALLO & THE FIXER. MILDREDA offers sinister cold sequences, aggressive vocals, KLINIK-al bombastic beats and noir haunting atmospheres in a top-notch poignant production quality that instantly grasps you by the throat until suffocation.

Today, the Belgian enfant-terrible confirms that the MILDREDA monster is more alive and kicking than ever since its much acclaimed resurrection! For the occasion of their exclusive support show of the legendary SKINNY PUPPY Godfathers, MILDREDA decided to release a limited 8-track EP entitled “Cowards”. An EP release bridging the previous “Coward Philosophy” album (from which we find club and extended versions of club hits like “This Time”, “The Parting” or yet the unmistakable “Erazor”) and the much promising forthcoming new album from which a bunch of new songs get revealed, giving a solid appetizer of the sombre abysmal tour de force that is coming our way from the MILDREDA fabric…

Dark cold electronics clashing with smart sampling from bombastic operas to horror flicks. Embracing the “Vancouver sound” style characterized by bands like FRONT LINE ASSEMBLY, NUMB and also SKINNY PUPPY and fused with the darkest and coldest Belgian EBM tradition of acts like THE KLINIK, INSEKT or even early FRONT 242 (eg. “Neon Eon”). The “Cowards” EP undoubtedly introduces the noirest and iciest MILDREDA tracks ever heard. Enjoy the powerful icy blast and get ready for the next level!

Be the first to review “Mildreda – Cowards EPCD” Cancel reply 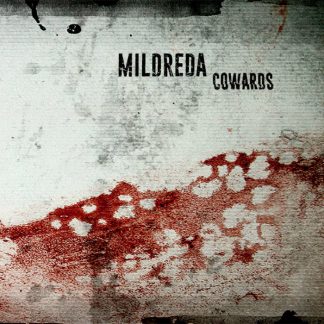