We no longer need to explain to you who Daniel Bressanutti aka DANIEL B. is: acknowledged as one of the few original pioneers in electronic music of his generation, the Belgian artist achieved success and recognition through his solid and challenging work with the legendary band FRONT 242, but also through various eclectic projects in the likes of MALE OR FEMALE, SPEED TRIBE, NOTHING BUT NOISE, 99.9 or yet DANIEL B. PROTHESE.

Together with DANIEL B. we decided to celebrate his 66th birthday by releasing this surprising and totally unexpected “Six+Six” album. During a 46+ minute long sonic journey through the artist’s prolific career, DANIEL B. revisited a selection of songs he wrote for FRONT 242 or MALE OR FEMALE by re-filtering them through his limitless sonic kaleidoscope anno 2020!

Meticulously selected to best fit the set-up of a new upbeat live-DJ concept of DANIEL B/PROTHESE that received raving reviews at its inauguration in Belgium in February 2020, just before the COVID-19 pandemic settled in and disrupted the world, leading to the cancellation of all other festival dates, these songs get now officially released to the world in studio format…

When you define making music as “organizing noise”, it’s no surprise that DANIEL B. always used studio moment accidents as starting points for his sound design and assembling process, relentlessly stretching his machines to their utmost limits for the most passionate, messy and addictive final result! An uncompromising creative attitude that simply commands respect.

Taking challenge after challenge, project after project, without any constraint nor restriction, DANIEL B. this time took the challenge of simply reinventing himself! Picking old-time personal favorites like “Happiness”, “Neurobashing”, “Seq666” and MorF’s club hit “Skeleton Toy” and bringing them to the next instrumental level. Fusing intricate sequences, adding dynamic noise and dense atmospheres and bringing these hypnotic and addictive rhythms to reach the ultimate peak where trance, electro, intelligent techno, and body music merge to make one and give you that hi-energy punch in the ears that makes you scream for more! Welcome to the Electronic B. Music universe.

The digital and CD edition of the album come out with the bonus track “Intro.Outro”.

“Six+Six” is also released in a very limited vinyl format edition (only 200 copies in total – in 2 different colours) on DANIEL B.’s own label brand:

Be the first to review “Daniel B. – Six+Six CD” Cancel reply 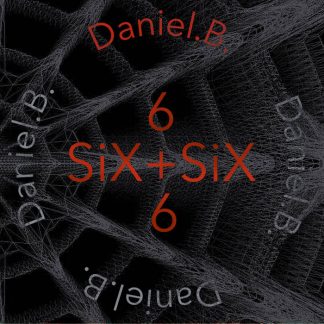