Besides these very characteristic elements which all contributed, release after release, to the amazing ascension of AD:KEY’s trademark on the underground electro scene, the symbiotic duo of Andrea and Rene Nowotny take us one step further, revealing the production and songwriting maturity they have once again gained since the release of “Reanimator” in November 2017. They intelligently play with minimal analogue synth melodies to reinforce the melodic side of their work, fuse them with hi-energy sequences and top them off with meticulously arranged rhythm patterns which come and reinforce their murderous basslines, while the vocals also gain in both force and diversity, remaining straight and powerful, but being also backed by more spoken, sensual or whispered parts, or even vocoded words…

On this new album, the AD:KEY couple also dare to bring us on to the dangerous battlefield of “love” shamelessly disclosing their inner feelings made of love, pain and disappointments, while always keeping some “tongue in cheek” lyrics here and there to avoid becoming too serious…

“Resonanz” reveals to us that AD:KEY at the top of their form, playing hard-hitting classic EBM songs at best evoking the pioneers of the genre in the likes of NITZER EBB or DIE KRUPPS reaching peaks on “Der Letzte Tanz” or the addictive “Ich Will, Dass Du Jetzt Gehst” (is it MISS KITTEN playing DAF?), but also more melodic body pop tunes à la AND ONE meets BIGOD 20 (“Herz Lass Los”, “This Is Not The Time”, “You Can’t Fuck Me”…) while being daring with some more experimental compositions with the slower vocoded “Schlachtfeld Der Liebe”, the minimal and poingnant “Du Und Ich”, the lingering atmospheric “I Stay” or yet the DEPECHE MODEsque “Nur Der Mond”.

“Resonanz” is bound to be the German body-pop album of the year!  Enjoy AD:KEY’s electronic body music with an additive melodic edge and dominating lush fronting female vox.  To love and abuse without moderation.

Be the first to review “AD:keY – Resonanz 2CD” Cancel reply 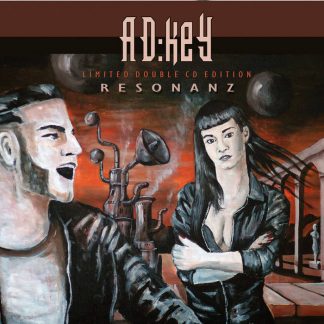