Avarice In Audio – Our Idols Are Filth CD

Reduced to its core duo after the release of “From The Rib Of Adam”, Gerry and Lawrie are again at the helm of the AVARICE IN AUDIO battleship. For two years the Australian boys have been working in silence, crafting a record just for clubs while the world burned outside… And now that lockdowns are ending, the time to unleash this monster from its cage has finally come!

From the opener “Wholesome As Hollywood” to the closer “Shock Value”, “Our Idols Are Filth” is two things, a nostalgic love letter to the late 2000’s dark electro scene, and a vicious screed against the modern world. Eschewing the soundscapes of previous material, “Our Idols Are Filth” has been built from the ground up as an album for the clubs. Pulsating basslines, blistering percussion and garage band guitars mixed with the catchy synth work AVARICE IN AUDIO has become synonymous with, “Our Idols Are Filth” is a record for the world reopening after lockdown, to embrace the pain and dance it away all the same. It is a loud, unrelenting and violent assault on the senses from all angles. 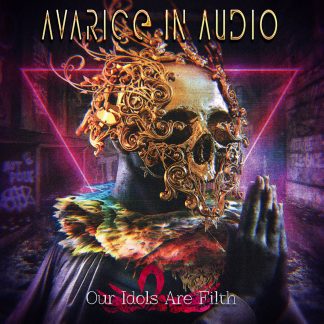 You're viewing: Avarice In Audio – Our Idols Are Filth CD €11,99
Add to cart
Manage Cookie Consent
We use cookies to optimize our website and our service.
Manage options Manage services Manage vendors Read more about these purposes
Preferences
{title} {title} {title}