Avarice In Audio – From The Rib of Adam CD

Since the release of 2018’s “No Punishment: No Paradise” album, Australian trio AVARICE IN AUDIO have been quietly dwelling on the forthcoming, releasing only small snippets of information. We can now finally reveal the results of this silence as Gerry, Ben & Lawrie bring us their most intimate and personal record yet.Originally initiated as a concept album based on “The Divine Comedy” by the Italian poet Dante Alighieri, this new album has since then undergone a slight overhaul in both theme and sound, but not forgetting Dante’s writings. “From The Rib Of Adam” is a fitting return to form for the trio, playing on each members strengths and building on one another to achieve a sound that is both beautiful and melodic, then transforming into aggressive and depraved without skipping a beat. A quite unpredictable and versatile sonic trademark making AVARICE IN AUDIO stand out as unique on the industrial scene with their stunning ability of writing poignant and catchy powerful aggro-tech dark elektro anthems (“Lolita Express”, “Trojan Horse…) while turning hyper catchy synth pop tunes into possessed, noir and addictive upbeat songs (“I Pray”, “Blame”…).The instruments this time around are far more eclectic as well, with Gerry incorporating sounds from his childhood, from 8-bit leads inspired by Super Nintendo games, to pipe organs heard at churches. Lawrie and Ben once more prove a tour de force as well; they combine instrumental talents to insane degrees, ranging from angelic harmonies and blissful soundscapes, to unapologetic basslines and aggressive percussion. Vocally, the album is what you have come to expect as well, with Gerry’s screams and Ben’s harmonies complimenting the music perfectly.

Collaborations this time feature EBM/Future Pop legend Tom Shear of ASSEMBLAGE 23 on vocals, Lawrie’s own Alfa Matrix signed project STUDIO-X and a versus collaboration with Canadian experimental IDM band PSYKKLE. AVARICE IN AUDIO have assembled a combination of industrial masters and old friends from many years prior.

For fans of AESTHETIC PERFECTION, SKINNY PUPPY, FRONT LINE ASSEMBLY or yet PROJECT PITCHFORK, “From The Rib Of Adam” is the most heart-baring release to date from the Australian trio. 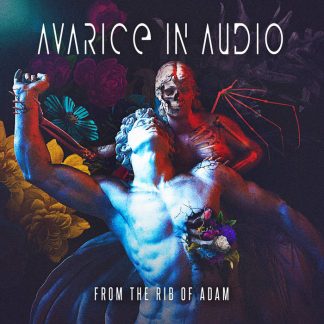 You're viewing: Avarice In Audio – From The Rib of Adam CD €11,99
Add to cart
Manage Cookie Consent
We use cookies to optimize our website and our service.
Manage options Manage services Manage vendors Read more about these purposes
Preferences
{title} {title} {title}