In 2014 AVARICE IN AUDIO released the “Shine & Burn” album to positive acclaim, delivering us a potent combination in dark electronics and EDM infused influence, with Jade’s hauntingly beautiful female voice and Gerry’s almost devilish growls to form an unexpectedly delightful combination. Today, we are excited to unveil one of our hidden gems in AVARICE IN AUDIO’s second album “Apollo & Dionysus”, an album drenched in symbolic reference, high quality production value and raw emotions fused together to create something greater than the sum of their parts.With the music written and produced in conjunction between new band member and longtime collaborator Lawrie (STUDIO-X, CRYOGENIC ECHELON) and Ayax (ASCENSION EX, CRYOGENIC ECHELON), and with the lyrics written between Gerry and the guest collaborators, “Apollo & Dionysus” strongly confirms that the AVARICE IN AUDIO triumvirate have become an absolute force to be reckoned with on the underground electronic music scene!

More versatile and unpredictable than ever, the Australian gang again covers on this new studio album a broad range of genres in electronic music. From the IDM and Drum N’ Bass infused “Crystal Tears” (featuring guest vocals by MONDTRÄUME!)  to the melancholy inducing orchestral closer “Heartstrings”, from the groovy modern synth pop “Juvenile Desires” (featuring MR KITTY) to the techno body club hit “Her Fire”, from the minimal and almost innocent  nintendo bleeps of the addictive “Fire Is Enough” to the noir and tortured “Six Feet Under”, AVARICE IN AUDIO have crafted both unique and experimental songs alongside potential new harsh elektro club-hits like “World Without Song”, “Pater Noster” or yet “Anthracite Nights”. Evoking comparisons to AESTHETIC PERFECTION, FADERHEAD, COMBICHRIST, GRENDEL or yet L’AME IMMORTELLE, AVARICE IN AUDIO present us here a true chef d’oeuvre of what dark elektro anno 2016 should sound like: powerful & hypnotizing, melodic & experimental, provoking & alluring, fresh & modern… 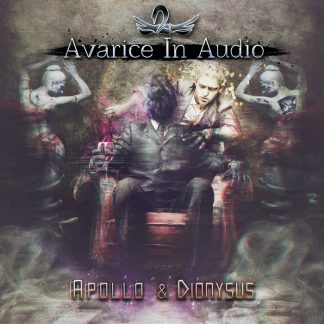