Created in 2003 in Antwerp, Belgium by studio freak Yves Schelpe and sensual female lead-vocalist Emélie Nicolaï, PSY’AVIAH do it again on “Introspection / Extrospection” on which they once more provocatively and deliberately blend eclectic music genres and modern styles, fusing laid-back moody piano songs, upbeat techno-rave, dark elektro and female fronted EBM-pop. What certainly makes this 4th album so special and so surprising is its artistic and sonic homogeneity with unique and open-minded diversity!

Moody piano based songs like “Ok” beautifully merge with upbeat electro-techno moments (“Human Garbage”, “SOS Overdose” or yet the virulent “Virtual Gods”) and other more electric electro pop tunes. An uplifting musical trip where genres are subordinate to the emotions and messages the songs carry. Isn’t it what we should call futuristic wave pop? Faithful to their concept of experimentation, through studio jam sessions / collaborations, and after having worked in the past with people like FRONT 242 or yet AYRIA, this time PSY’AVIAH joined hands with the beautiful Swedish artist and model Kari Berg (ex-ASHBURY HEIGHTS) who delivers dark melodic vocals for the track “Deep Dark Desire”. “Home” is coloured by the vocals of the talented MISERY singer Lis van den Akker.

Last but not least, the third collaboration is with MC Dééjoohcéé and Thomas C Beerten, energetic beats and flowing rhymes on the electro rap “Nouveau Quiche”. The album also features a cover version of SHAKIRA’s “Timor”, rendering the original into a trance-melodic-industrial mélange. With this new album, PSY’AVIAH has reached a new milestone in their career with alluring and diversified vocal performances, edgy mature electronic song arrangements and a unique touch of modernism and freshness.

PSY’AVIAH is an innovative and creative artistic force to be reckoned with and for the limited edition version of this album, they decided to offer us a bonus disc on which they first of all partly turned upside-down the “traditional” concept of remixes, asking some bands to make a cover-version of PSY’AVIAH songs: “Tired” performed by MISERY, “Home” by H    artung & Schleinitz (with vocals by ex-SERO.OVERDOSE lead singer), “Something Evil” by CHAOS ALL STARS feat. Mona Roukachi, “SOS Overdose” by LEAETHER STRIP who added his own style and extra lyrics, and many more… They also put the focus on lining-up an impressive list of classic straight dancefloor remixes by the hand of NOISUF-X, RADICAL G, SAM, FREAKANGEL or yet trance godfather Mike Dierickx who delivers a remix under his “M.I.K.E.” guise… 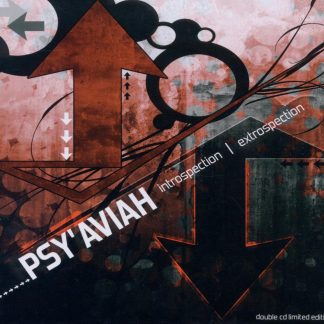