Art begets art, the saying goes. A cliché as big as a house, but one that holds a fundamental truth. More than likely, Passengers A. and S., the sonic engineers of Metroland, will need no persuading: on “Mind The Gap”, their impressive debut released in 2012, they already put the theory of the Gesammtkunstwerk into practice and instantly established their vintage electronic trademark sound which also brought them unmistakable comparisons with keyboard pioneers like KRAFTWERK or yet TELEX.

More than two years have passed since, but even though 2014 saw the release of “Thalys”, a tribute to the high-speed train, the work on the new album started almost immediately after the first album’s launch. Inspired by the basic principles of design in general – Unity, hierarchy, variety, the passengers deemed it logical to draw inspiration from the art movement where these principles were put into practice and resulted in an almost unbelievable array of artefacts and creations: the Bauhaus movement, founded in 1919 by the architect Walter Gropius. The idea of creating a total movement, where all art forms would be present, sparked a creative avalanche, with a huge and lasting influence – to this day – on art, architecture, graphic design, interior design, industrial design, and even typography.

It was only logical that these would become the trinity of values for the music and design of Metroland’s “Triadic Ballet” album: three silvery discspackaged in a Bauhaus-inspired deluxe box: Disc 1, aptly titled ‘Unity’,starts off with a trilogy of “Design”, emphasizing – again – unity, variety and hierarchy. “3 Directors”, a far more nervous and edgy affair, could well be the perfect soundtrack to the rollercoaster ride experienced by the Bauhaus’ three directors Gropius, Meyer and van der Rohe. It paves the way for “Ikone Der Moderne”, a 90’s electro inspired four-to-the-floor, soothed by rainy arpeggios and driven forward by throbbing strings. “Zeppelin” then, is definitely up, up and away, providing blue skies and breathing space, before the frenzy returns with“Machines Gone Mad” and the weirdness of “Triadic Ballet”. “Art + Technology” and “Struktur” find some inspiration in the great city of Düsseldorf, while “Les 3 Couleurs” (The 3 Colours) shows the Passengers moving into their own ground. “The Manifesto” is the seamless combination of musical backdrop vs spoken word, and as such it’s an intriguing illustration of the Bauhaus theory. It’s also the perfect introductory piece for “Utopia”, probably the most emotionally gripping song Metroland have created to date: Bauhaus was about men who believed in a utopian world where human meets mechanical: if the band succeeded in one thing, it’s proving that this combination, when applied to music, can lead to astonishing and moving results.

Disc 2 and 3 belong to the remixers. They took the songs, filtered them through their own artistic sieve and came up with results as diverse as they are interesting: from the synthpop of the Greek Fotonovela to the electro of Laurent Paranthoën’s Commuter, or the minimal EBM of Belgium’s Absolute Body Control to the toy shop of Playboy’s Bend (origin unsure. Could be La La Land). All in all, it’s a different journey than disc 1, for sure. But those who stick with it to the end, may find it a rewarding addition to the voyage. 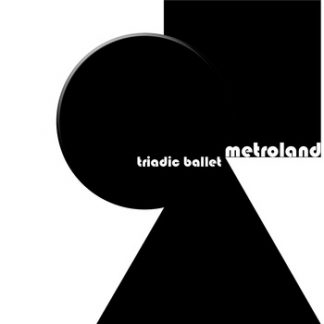