Only 2 left in stock

This package holds a 180 gram vinyl 12″ + an extra CD. The CD tracks will be sent to you as download as well upon release.

Something that started as a crazy idea in a text message, got followed by a 6 second melody written while the band was on the road supporting 80’s legend OMD, and eventually morphed into a unique multi-cultural adventure and fruitful collaboration with the renown international railway company itself: “Thalys”, symbolised worldwide by its famous high-speed burgundy red trains…

You are fond of vintage keyboards, you got seduced last year by Belgium’s METROLAND’s successful “Mind The Gap” album and you have LP’s by KRAFTWERK, TELEX and KOMPUTER in your music collection? Then, dear ladies and gentlemen, get seated for a new exciting sonic journey across Europe with METROLAND who bring us to the next level with their trademark sound made of carrying layers of melodic synths, robotic vocals and analogue drum machines.

This stand-alone “Thalys” 12″ release marks the switch for METROLAND, from one dimension to another that will be opened and revealed in 2015 only… The “Thalys” tune perfectly fits this vinyl format with its extended structure in 2 consecutive non-stop mixed songs crowned by a splendid (and vinyl exclusive!!) remake on the second side by living legend producer/remixer PAUL KENDALL (best known for his current work with Alan Wilder (RECOIL/DEPECHE MODE) and his numerous remixes and productions for the legendary Mute Records). Additionally the B-side song “From Station To Station” was created from recycled parts of the “Thalys” original song to reach new destinations city after city…

The included CD edition of the “Thalys” EP features alternative versions of the songs including stunning remixes by JONTEKNIK and NORTHERN KIND.

We will also notice within this challenging travelling conceptual project, that although all the burgundy red trains are this time departing from METROLAND’s homeland capital Brussels, the digital version of the “Thalys” EP gets released in 3 different language versions according to its final “download” destination, with a French version for the “Paris” edition, a German version for the “Düsseldorf” edition and a “London” edition in English for the rest of the world… Die-hard METROLAND collectors will nevertheless find their way around these territorial frontiers and embrace all 3 versions thanks to Alfa Matrix’s official space-travelling Bandcamp machine alfamatrix.bandcamp.com .

This extraordinary sonic homage by the METROLAND duo to this successful 21st century piece of technology and means of transportation that is embodied by the Thalys burgundy red trains gets marketed by Alfa Matrix in a very limited edition of 333 copies in “vinyl+CD package” format. React fast and add this ultimate futuristic collaboration to your collection.

METROLAND and Thalys: Man and machine in perfect harmony!

Tracklist 12″ Vinyl
(These tracks are only available on vinyl and not as download):

Tracklist CD
(These tracks will be sent to you as download upon release): 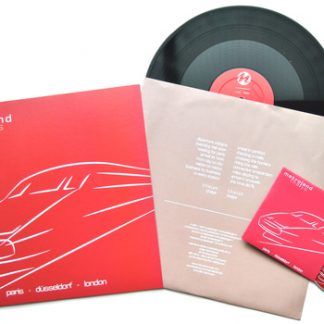