Cult American electro/industrial act MENTALLO & THE FIXER strikes back with another limited edition 3CD box release that will no doubt please all their fans! Like its title suggests, “Zothera” refers to the two Texan brother’s (Gary and Dwayne Dassing) golden years period when they signed a multiple-album deal with Talla 2XLC’s legendary German label Zoth Ommog.

This new box-release does not only hold fully remastered versions of the classic albums “Revelations 23” and “Where Angels Fear To Tread”, but also the exclusive “Apocrypha” bonus disc, a unique retrospective album featuring 16 hidden old-school treasures (over 70 plus minutes) with a majority of previously unreleased remixes/versions! Highly emotional and complex, MENTALLO & THE FIXER’s music is characterized by snarling distorted vocals, hard cutting sequencer rhythms and thunderous beats.

If the “Revelations 23” album laid the brutal electro-industrial foundations of MENTALLO & THE FIXER’s huge discography with strong and aggressive hits like “Legion of Lepers”, “Pulse Hemorrhage”, or yet “Ancient Languages”; the “Where Angels Fear to Tread” 3rd album confirmed the band’s raw power, dark intensity and multi-layered compositions’ complexity with killer tracks like “Sacrilege”, “Bring to a Boil” or “Afterglow”.

“The remastering made such a huge difference. I’m so very pleased with the quality. It’s amazing! It’s like reliving a specific defined memory for me…”, proudly says Gary Dassing about these 2 remastered albums.

MENTALLO & THE FIXER’s past work always had some kind of Biblical connotation, so it’s no surprise to see the bonus 3rd disc titled “Apocrypha”, and that the “Zothera” box dark visual artwork concept is designed around the contradictory theme of guardian angels carrying savage weapons and the Bible’s darkest parts… Let no one mislead you: MENTALLO & THE FIXER will deliver us from Evil!

A FREE bonus 18-track CD label compilation is included in the box: “Sounds From The Matrix 015” featuring previously unreleased songs from most recent & forthcoming releases on the Alfa Matrix label! 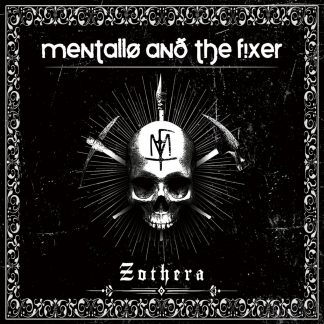