While we were all wondering where the great Belgian electro act LLUMEN was hiding the last few years, mastermind Pieter Coussement was actually going through a serious health crisis… Constantly struggling against the deep emotional turmoil of progressively recovering his health, the artist realised abruptly that life could be finite. It opened an introspective catharsis leading to him eventually rediscovering himself, growing new roots and finally being able to move forward again.

LLUMEN’s new album “Polygon Heart” reflects that very personal post-surgery rebirth, meticulously pinpointing past events and finding a path out of the dark, hoping to heal his broken heart once more. With a blurred line between autobiographical and fictional, the new songs feel very close to his heart but also touch on topics that are universal and we can easily relate to. Songs like ”Lifeline”, “My Heart Inside Your Hands” and even “Like My Pain”,  craftily depict scenes where Eros and Thanatos rhythmically dance to a cold steady beat. The album “Polygon Heart” serves both as a testament and an invitation;  “I hope people can relate to my songs, maybe find comfort in them too, just like me. I keep on finding solace in these songs from the soundtrack for the most trying period I had to endure in my life…”, says Pieter.

From true epic dark introspective tracks like the bombastically hitting “Desert Land” or “The Scars I Made” to the poignant love song “The Path That Leads Me Home”, LLUMEN writes songs with such a profound honesty that they hit you straight into your heart!

An uplifting comeback by one of the best-hidden Belgian jewels in the electro scene. LLUMEN are back, stronger than ever and will offer you intense and forceful future pop / dark elektro moments that should seduce all fans of acts in the likes of VNV NATION, ASSEMBLAGE 23, HAUJOBB, MESH and COVENANT. 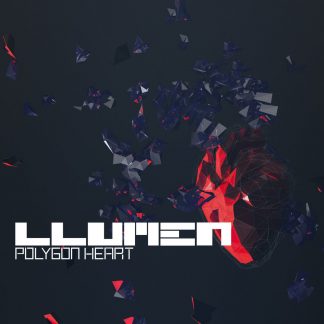