LEAETHER STRIP’s “Yes I’m Limited” tradition continues and enters into its 5th chapter! Especially compiled for the band’s hardcore fans who all contributed to make Claus Larsen’s return on stage unforgettable in this year 2009, the Danish artist dedicates to them this diversified collection of some 27 exclusive rarities! This collection is definitely special enough to be released on Claus Larsen’s birthday ! A splendid double-CD fan box on which LEAETHER STRIP kicks off with 9 early 80’s demo songs which were Claus Larsen’s first works ever!

Add to this some special unreleased studio recordings of songs he has been playing live this year like “Kill a faetish”, “AEghty AEight (US mix)” or yet the killing new version of “Don’t Tame Your Soul”. We also get special live intro’s he wrote for his shows in Cologne and Gothenburg. You will also enjoy the very engaged “The bears aren’t sleeping tonight”, the intimate “Love me or die”, the synthetic layers of a tribute to Jean-Michel Jarre on the aptly titled “Fluidity” or yet the next club hit and future new “AE” classic “Compassion”.

All in all not less than some 9 totally new & unreleased tracks! As if it were not enough, Claus Larsen also reveals a bunch of collaborations and remix work by bands like DIE KRUPPS, PROJECT PITCHFORK, AUTODAFEH, etc. The eye-catching artwork was designed by American artist Evi Numen.

Also included in this special limited box: the FREE 17-track exclusive label compilation “Sounds from the matrix 009” revealing the talent of some of Claus Larsen’s label mates and above all featuring a unique hard trance mix by STUDIO-X of LEAETHER STRIP’s new “Compassion”. 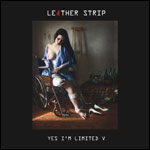