This new mini-album offers much more of the band’s good old recipe for success of harsh distorted vocals, ripping bass lines and upbeat sequences. A storm of elektro assaults from the unexpected upgraded 2006 version of Claus Larsen’s stellar hit “Adrenalin Rush” to the frantic attack of “Manic Aggression” through “Punktured Eyeballs” which is most probably Claus Larsen’s most terrific anger burst he has ever released. Next to more disturbing moments with “Watch It Burn” and “The Kitchen Knife”, Leaether Strip also planned a little more melodic break with the engaged symphonic tune “We Will Walk With Pride”, a cover version of Marc Almond’s “Tears Run Rings” and yet a surprising homage song to Fad Gadget and co with “Frank Tovey Taught Me Things”.

This EPCD is also available as an extended bonus tracks download – see the player below. 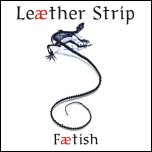