Here comes the most anxiously anticipated third volume of LEAETHER STRIP “Retention” box series through which Claus Larsen is re-releasing his complete back-catalogue. Each re-release has both the fully remastered version of the original album (with special bonus material) on disc one and on the second disc, a totally rewritten and reinterpretation of some selected songs from the original album by LEAETHER STRIP himself rerecorded with current technologies.

“Solitary Confinement” is without any doubt the album that has forever seated the Danish artist on the throne of classic dark EBM. An album froth with countless club hits in the likes of “Strap Me Down”, “Adrenalin Rush” and “Evil Speaks”… an album that established LEAETHER STRIP as THEEEE reference trademark for aggressive electronics with distorted vocals performed with a strong sense for melody and carrying choruses.

Once again, the “Retention no. 3” box includes 2 complementary albums: first of which is the “Solitary Confinement” CD remastered by Claus Larsen himself, giving a stronger and wider sound to this chef d’oeuvre while staying very faithful to the original work. The original track-list has also been extended to 16 tracks with the addition of tracks from the “Material” EP.

Next comes the “Voluntary Confinement” CD which gathers some 10 selected tracks taken from disc one, totally re-written and re-recorded by LEAETHER STRIP in the 2009 upgraded Strip Farm studio, benefiting from today’s technologies and Claus Larsen’s acquired expertise through the decades. Add to this 2 brand new songs with “Voluntary Confinement” and “The AEnd”, as well as a very cool melodic “Taeknopop” version of the interstellar hit “Strap Me Down”.

Both discs are NOT available separately and are only sold in this deluxe carton box. 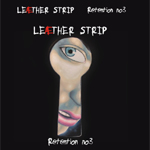