In 1988, young angry Danish teenager Claus Larsen would ignite an electro/industrial firework that is still exploding high and loud 20 years later and across the whole world… The brutal LEAETHER STRIP machine really knows no ‘stop’ button and has again switched back to ‘attack mode’ loaded with the brand new double-CD “Civil Disobedience”. A new album full of hate, venom and frustration, but also a new album so true, so direct and so deep that it can be heard as a forceful call through a megaphone for revolution, action and reaction.

Album after album, Danish EBM legend LEAETHER STRIP has constantly fueled the underground dancefloors and he will set the fire again in 2008 with monster power tracks like the instant hit “When Blood Runs Dark”, the solid “Jagtvej 69”, the punkish “Pissing On My Territory”, “The Cradle of Death” or yet “Going Nowhere”.

To mark these 20 years in dark blood, Claus Larsen seized the opportunity to write the conceptual “one-nine-eight-two” CD, a collection of forbidden art that Claus Larsen devoted to the good old years of moogs and 808s… An electronic tribute to the magic year 1982, when he bought his first synthesizer, his beloved Moog Prodigy that radically scrambled his life for the many decades to follow, and would transform a frustrated revolted teenager hiding his homosexuality into a happy and obsessed daydreamer with a noir soul carried away by his flood of creativity and composing frenzy.

This 2CD is also available as an extended bonus tracks download – see the player below. 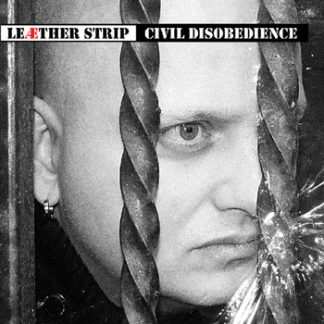