Album 11 is a fact! Announced by the surprising “Phantom Pain” EP and video clip, cult Belgian electro act IMPLANT is back in full force and signs with “Cognitive Dissonance” not only their most personal album to date but also the most diverse in sound and the most electro pop oriented to date.

Next to an obvious strong focus on song production where every tiny detail makes the difference, the overall catchiness of this album embodies its essence and operates as a red light from start to finish, plunging us into a melodic bath of catchy synth lines, poignant sing-along choruses, carrying pulsing sequences and other vicious noise loops. From the frontal industrial dance of “The Devil Made Me Do It” and the dark elektro hit “Censorship Through Noise” to the lush and sublime melancholic chanson “The Last Record” through more upbeat future pop songs like “Phantom Pain”, “Run To The Light” or the techno pop “The King And The Rebel”, this new album has a high addictive potential for all electro industrial freaks open to synth pop music with an edge. And this also gets reinforced by the sensual vocal contribution of HELALYN FLOWERS’ frontgirl Noemi Aurora on several songs. And as always with IMPLANT, the album of course holds some sonic surprises and more experimental moments evoking techno, trance and other allusions to the very characteristic sound of Belgium (eg. “The Room”, “Nutshell”).

Besides its quite intimate lyrics, “Cognitive Dissonance” also triggers questioning on choices we blindly make by joining, intentionally or not, social, artistic or other political bubbles in which we get cocooned and fed to enjoy our artificially created comfort to the max, giving everyone a feeling of being a special snowflake in the universe… Any form of dissonance within such bubble being perceived as offensive and getting censored through noise. “As an artist, one must strive to trigger all sort of discomforts. It’s the essence of creativity!”, says Len Lemeire. “It’s a form of cognitive dissonance for IMPLANT to release such a melodic electro pop album with balls! It’s a form of cognitive dissonance to gather such different remixers on one same disc. It’s a form of cognitive dissonance for us to hope and make the difference with an album”, he adds, tongue in cheek.

Did you have your Implant today? 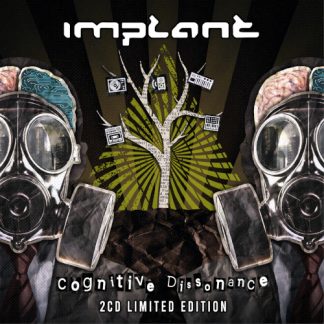