Helalyn Flowers – White me in – black me out 2CD

After some 3 years of stylistic refinement, the Italian Metallic Electro Rock duo strikes back with the eagerly awaited third full length record “White Me In | Black Me Out”, an album based on duality and dichotomy which might be seen as their darkest release ever. Somehow, it stands somewhere in between the rawness and the hi-energy of the debut “A Voluntary Coincidence” and the highly melodic and surrealistic “Stitches Of Eden”. But it’s also different at the same time, showing HELALYN FLOWERS for who they are, for what they mean… More essence, less embellishments, more moods, less artefacts, revealing the dark side of the sweetest melody, giving a cinematic touch to their alluring mixture of Metal Goth Rock and dark Synth Pop.

The setting is made of clashing opposites that make our world, its self-destructing sharp truths when what shines inside gets perceived as noir and somber from the outside. “White” songs like “Utopia”, “Shake” or yet “Lost In Translation” enter in a schizophrenic clash against the “black” songs that are “Collide”, “Electric Night” or yet “Alkaline Twins” all linked by transcending dual tunes like “White Me In Black Me Out” or the club night anthem “Before The Sunshine”.

HELALYN FLOWERS keep surprising us song after song on this darkly beautiful album by intermingling varied influences going from SISTERS OF MERCY to SKOLD or even MARYLIN MANSON, NEW ORDER, THE CURE, DEPECHE MODE and even THE PRODIGY. Elements of Gothic Rock, Industrial Metal, Dark Electro, Synth Pop all get fused together for an exploding sonic cocktail rich in emotions and diversity. Between the destructive and almost martial metal dance pop of “Alkaline Twins”, the NINE INCH NAILS meets cyber-punk feel of “Hi-Tech Medusa” or yet the catchy gloomy moody Electro Pop Rock of “White Me In Black Me Out”, we also find a toxic electric interpretation of PJ HARVEY’s classic “Rid Of Me” or yet the poignant and ghostly “Utopia” which stands out with its intricate arrangement evoking early BJORK’s dreamy atmospheres versus SIGUR ROS’ tortured alternative style with an operatic feel revealing female singer N0emi Aurora touching soprano and madrigal over layers of twisted electronics in the vein of SKINNY PUPPY… a spontaneous exchange of opposites where everything that is white becomes black-shaped and reaches oblivion…

This limited deluxe carton box comes with splendid design and the “Wireless Survivors” bonus disc featuring HELALYN FLOWERS performing a twisted “Satisfaction”, freely based on the original theme with the same title by THE ROLLING STONES, and stunning versions of THE RAMONES’ “Pet Sematary” as well as techno guru’s 2 UNLIMITED’s intergalactic hit “No Limits” before getting served some exclusive electronic remixes by STUDIO-X, AESTHETISCHE, PSY’AVIAH, INERTIA, JUNKSISTA, IMPLANT, NEIKKA RPM, DIGITALIS PURPUREA and CRYOGENIC. 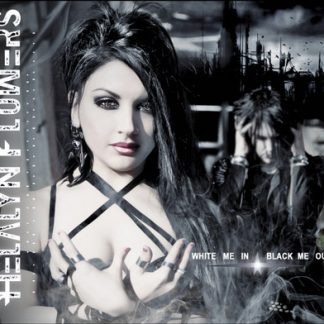 You're viewing: Helalyn Flowers – White me in – black me out 2CD €17,99
Add to cart
Manage Cookie Consent
We use cookies to optimize our website and our service.
Manage options Manage services Manage vendors Read more about these purposes
Preferences
{title} {title} {title}