On DISKONNEKTED’s 3rd full length album “Old School Policies”, Belgian artist Jan Dewulf shows a furious face and shoots his anger at religious freaks and other conservative propaganda politicians. While “Old School Policies” will probably be perceived as DISKONNEKTED’s darkest album ever, and which might sound quite logical after the chilling noir atmosphere of the predecessor and huge club-hit “Frozen” EP he did together with Dirk Ivens (DIVE,SONAR, KLINIK) last year, this new CD is also for sure his most open and diverse work to date.

The characteristic DISKONNEKTED groovy vibes were given new orientations ranging from the explosive industrial hip hop collaboration with SMP on “Anger” to lush classy edgy synth pop on “Storm” (with Frank M Spinath from Seabound on vocals) or yet industrial dance on the viral club-filler “Pray Vote Donate Buy”. The album brilliantly jumps from upbeat scenarios to more relaxed moments while keeping its full anger and climax intact all the way through. This is modern and “straight-in-ya-face” electronic music made in Belgium.

In this double-CD limited carton box edition you’ll find the forbidden Propaganda soundtrack from DISKONNEKTED’s imaginary totalitarian regime in the form of 9 radical remixes including the broken beats of KEEF BAKER, the dark electro of CONTROLLED COLLAPSE towards the dance attack of XP8, the groove of IRIS or yet the amazing clashy clubtracks from HEADSCAN and NORTHBORNE. 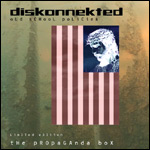