In 2016, Alfa Matrix released the first full-length album by FRONT 242 founding member Daniel B.’s solo-project: DANIEL. B. PROTHESE. The “Überlastung” vinyl box and its CD companion “AIIHB0A0” were both sold-out prior to release date.

The new year 2018 will start straight into it with the release of DANIEL. B. PROTHESE’s new album “CHZWaaR+ZMe+aaL” which will once again be released in several formats: a clear transparent vinyl edition limited to 300 copies only (with carton sleeve CD included and exclusive poster), a stand-alone digi-sleeve CD edition and last but not least a deluxe double-CD edition with an exclusive 8-track bonus disc. Music collectors will also notice that our dear friends of Wool-E are also once again simultaneously issuing a tape of DANIEL B. PROTHESE limited to only 111 copies. Once again, the music on CD, vinyl (and tape) are part of a whole, with different tracks on each medium, aptly chosen to best match with the specific playback conditions offered by each medium…

On –, DANIEL. B. PROTHESE reveals a less experimental and much more rhythmic side of the project with powerful minimal industrial sequences sometimes even coming closer to the rough basslines of EBM. “It is my take on ebm… Electronic .B. Music”, says Daniel B. laughing. “It is a mix of new and old formulas, I wanted to go back in time but at the same time not really sound retro. I tried to explore new ways to make that kind of music and make it sound less like the “schlager gothic” it has sometimes become…”.

With this new album, DANIEL B. PROTHESE reminds us that his conceptual approach is centered on musical freedom without constrains, allowing you to simply expect the unexpected, release after release… “I think you can always tell that there is at least a certain “Daniel. B” feel to any of my musical approach, and it is almost impossible to erase this”, Daniel B. adds.  And why would we want to!  It’s “DB+tronics” at its best…

Be the first to review “Daniel B. Prothèse – CHZWaaR+ZMe+aaL CD” Cancel reply 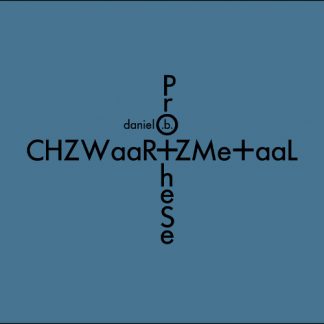