Like Belgian artist Franky Deblomme always claimed with his CUBIC project, he distils his own eclectic influences within the wide spectrum of electronic music into a fireworks display of melodic techno, minimal synth pop, hypnotic trance and 808 electro with a darkish touch of underground body music in the background.

With the “Exit” series, CUBIC demonstrates that the influential view that “man is the product of his environment”, so forcefully stated by Hippocrates, can also apply to musicians.

After a first exciting stop in Frankfurt with the first edition, we were all wondering what would be the next CUBIC sonic destination. On this second chapter “Exit: Ghent”, CUBIC revisits his past influences and tributes the city of Ghent (Belgium) that so much influenced his personal music tastes and therefore influenced and shaped the foundation of his music.

Although Ghent already played an important role during the New Beat period, the seeds for what would later become what we know today as “electronic music” really started to blossom in the early 90s. “In 92, when I went to study in Ghent , I was at the right place at the right time to see the whole culture blossom. Although we were still in the grunge and guitars era in terms of mainstream music, electro started to bubble up. Ghent was then the home of some iconic record labels (Music Man, R&S records), specialised record shops, small bars and (after-)clubs (such as Zodiac, Les Enfants Terribles, etc)”. Remembers Franky.

This new 4-track EP carries the perfect summer vibes which remind us all that it’s not for nothing that Belgium is so famous for hosting the best and most prestigious electronic festivals. With fairy tale vocals and a main carrying melody that sticks in your mind in a fraction of a second, the opening track “Argon” instantly sets the mood! And the club feel intimacy simply gets underlined by “One For Greg”, evoking the Zodiac parties of the 90’s. “This track is dedicated to a good friend of mine who died far too young. In the early 90’s we used to visit the Zodiac club in the center of Ghent. These DJ’s inspired me. Definitely one of the reasons I got involved in electronic music later…”, Adds Franky with a certain nostalgia. “Hold On” taks us one step further incorporating elements of dance, techno and trance, capturing the essence of the iconic Belgian clubs of the time! Last but not least, this EP features once again other Belgian guests behind the remixing console, with none other than METROLAND fame turning “Asteroids” into a lush epic 9-minute plus version divided into 2 parts with a stunning tempo change.

Crisp, phat and trancey: this is the sound of C…UBIC.

Ready for the next exit after these good old Belgian electro club memories? I got my ticket to the next destination! 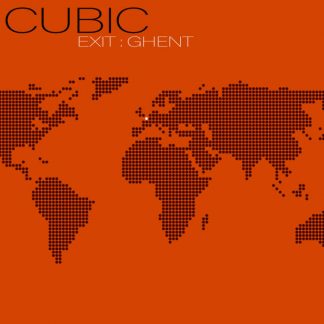