Avarice In Audio – No Punishment – No Paradise CD

With “Shine & Burn” (2014) and “Apollo & Dionysus” (2016), the Australian gang of AVARICE IN AUDIO have served us an impressive range of electronic music genres, profiling themselves as one of the most versatile and unpredictable bands on the electro industrial scene.

Today, they return after two years to deliver “No Punishment : No Paradise”, their 3rd full length studio album. Once again eschewing conventional musical practices, this record has been built from the ground up, shunning the polish of previous works in favour of a more visceral, raw and unapologetic sound. Gerry’s devilish screaming has never sounded so good once paired with Ben’s stellar vocal range of Gregorian era chanting, punk rock style singing and his own screams in unison.

The songs this time around are much more “Australian” in style than ever, with synthpop style instrumentals meeting Lawrie and Ben’s skilled guitar work, both blending in grungy rhythms and soaring solos mixing in with the electronic layered production.

“No Punishment : No Paradise” is undoubtedly harsher, dirtier and harder than any previous AVARICE IN AUDIO output so far, while still holding on to the band’s key sound characteristics including infectious synth melodies, vicious vocal dualities, groovy basslines, a modern electro production style and overall noir atmospheres. A true hypnotic tour de force of dark elektro industrial straight into your brain for the absolute sonic punishment before redemption… 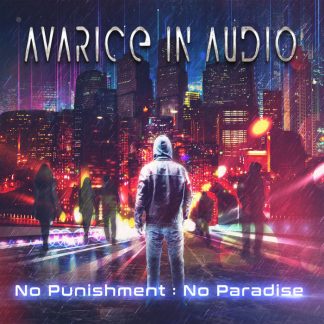 You're viewing: Avarice In Audio – No Punishment – No Paradise CD €11,99
Add to cart
Manage Cookie Consent
We use cookies to optimize our website and our service.
Manage options Manage services Manage vendors Read more about these purposes
Preferences
{title} {title} {title}