Mostly known so far for being the female voice behind TOTEM OBSCURA and some ACYLUM tracks, Nadine “Cooraz” Engel presents to us, “Freakshow”, the debut album of her solo-project AENGELDUST which has been highly anticipated since the release of the previous successful “Dancefloor Killer” teaser download EP. Armed with brutal beats and loud electronic noise sequences, the German artist fights on the side of the power noise pioneers in the likes of SONAR and later KIEW or yet WINTERKÄLTE, against the more current techno industrial modern trends… “Freakshow” is definitely a back to the roots assault straight into the face of the stagnant dark industrial scene from an angry woman who is not afraid of launching devastating walls of sound into your speakers, injecting tortured German vocal samples and harsh manipulated vocals into an extreme hard industrial hammering sonic attack. A resonating and disturbing noise cocktail enriched with numerous collaborations with artists in the likes of :WUMPSCUT:, ASSEPTIC ROOM, TOTEM OBSCURA, NANO INFECT, DIRTY K, SVE and Ethan Fawkes. The underworld bitch is back to blow up your industrial standards at full blast… Enjoy the kick!

Be the first to review “Aengeldust – Freakshow CD” Cancel reply 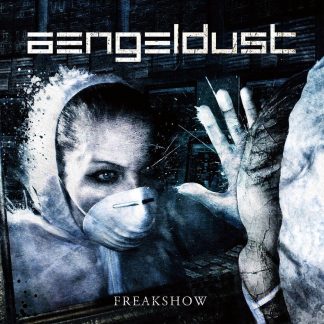