ACYLUM is one of these bands that we hate to the extreme or simply devotedly adore with no limit – nothing in between! After having been active with various side-projects (TOTEM OBSCURA, AENGELDUST…) for some time, the German master of uncompromising dark elektro Pedro Engel announced his comeback with the controversial and club smasher “Zigeunerjunge” EP which worked as the perfect appetizer for ACYLUM’s 5th studio album.

After “Karzinom”, comes “Pest”! While with time, some bands tend to become more accessible and gentle, it seems that ACYLUM took another path, offering us his darkest, hardest and noisiest effort to date. Under the heavy noir thematic of the plague disease, ACYLUM widens the thematic scope of that terrible disease and matches it with other World (socio-political) diseases and almost taboo concerns of our turbulent times, let is be the Ebola contagion, terror attacks, Islamic and religious amalgams, rise of nationalism, etc. The “Pest” is still dormant on Earth and simply wears different faces to better infiltrate our modern societies. The virus is everywhere and ACYLUM spits his hateful venom on it all, in full provocation mode… Aggressive, powerful and dirty, ACYLUM absolutely knows no limits in its artistic approach and dares to write about touchy socio-political topics in Europe and mixing them with provocative German vocal samples.

ACYLUM’s new club weapons are this time titled “Zigeunerjunge”, “Vaterland” or yet “Rhythm Of Violence” (featuring the unexpected vocal contribution of WYNARDTAGE), but also the much more malevolent, brutal and distorted tracks like the disturbing “Breivik”, the vibrating “Romance” or the massive potential new club hits “Born To Be Hated” and the poignant “Knife”.

The album also reveals some slower passages of extreme darkness and dense atmospheres on songs of desolation like the suffocating “Pest”, the bewitching and mesmerizing hellish calls of “Follow Me”, or yet the morbid melody of “Plague” on which we get the impression that Nadine “Cooraz” Engel is singing from beyond the grave… Last but not least, we will also mention the interesting jam session on “Heads Of Innocents” featuring a studio collaboration between some 7 bands with vocals in 4 different languages!
On “Pest”, the ACYLUM scavengers wander on the desolated battlefields, they feed themselves from the hidden corpses of our decaying society and spread their sonic virus loudly without disguise bite after bite. Let us follow them in their harsh and dirty quest for a better Underworld…

Be the first to review “Acylum – Pest 2CD” Cancel reply 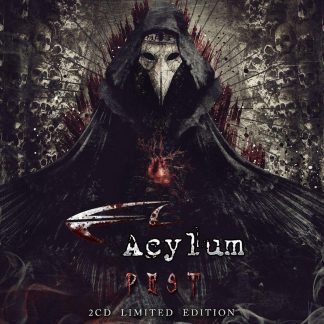