Founded in 2007, SCHWARZBLUT is a 5-piece band from the Netherlands that blends romantic melancholic Weimar poetry with danceable dark electronic music. On their dark electro industrial 2nd full-length album ‘Maschinenwesen’, they pay a tribute to German poetry from the era of industrial revolution – a time in which some could explore and progress, as much as others suffered exploitation, misfortune and disease.

As always, SCHWARZBLUT used historical poetry by a variety of writers, taken from the band’s very own collection of centuries old books. In thirteen tracks the band paints a picture with romantic, melancholic yet also grim touches. As all poems have their own character, so do the songs that make up ‘Maschinenwesen’. Going from EBM dance-floor killers such as ‘An den Todesengel’, ‘Schlußpoetik’ and ‘Ein Schatten’ to atmospheric electro tracks like ‘Einst’ and ‘Der Schwere Abend’. The track ‘Die Fabrik’ is a massive machine-ridden song that leads you right into an 18th century steel factory, whereas the triptych ‘Gesang der Geister über den Wassern’ is a classical avant-garde masterpiece, featuring several guest vocalists and film score-like orchestrations. For the beautifully haunting track ‘Nomen Est Omen’ the band went to a special studio to record the choir parts that give this track its grandeur. SCHWARZBLUT reinforce their eclectic style diversity that accentuates a beautiful duality between male and female vocalists. They surprise us more than ever by mixing pounding electro rhythms, harmonic choirs, distorted vocals, cutting leads, grandiloquent orchestras, dark romanticism and German lyrical poetry.

To visualize the concept of ‘Maschinenwesen’ SCHWARZBLUT teamed up with Steampunk designer Rosanna Hoogendoorn, known for her shows at the Summer Darkness festival and Cyberia parties. Throughout the 16-page artwork of ‘Maschinenwesen’ you can feast your eyes on the work of Miss Hoogendoorn and photographer Frank Wiersema.

Be the first to review “Schwarzblut – Maschinenwesen 2CD” Cancel reply 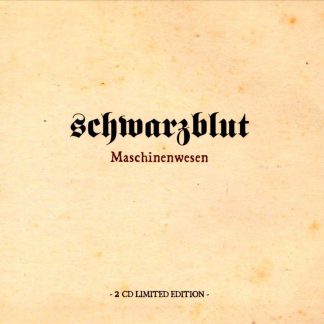