Schwarzblut (full name: Die goetheanistische TonkunstgesellschaftSchwarzblut) is a Gesamstkunstwerk. A collective work of art, based on historic German poetry and carried by organic-electronic music. Schwarzblut’s work is outlined by a haunting visual context of imagery in their album artwork and during live shows. Each Schwarzblut release is a group effort, including the arts of composing, poetry, fashion, photography, video and design. Each Schwarzblut live show too is a performance featuring these ingredients.

The group was founded in 2007 and signed with Alfa Matrix in 2009.Through Alfa Matrix the band released the EP ‘Sehlenwolf’ (2009), their debut album ‘Das Mausoleum’ (2010) and their sophomore full-length release ’Maschinenwesen’ (2012). Early 2014 Schwarzblut returned to the scene with the 5-track EP ‘Bis aufs Blut’. Now the band releases their 3rd full-length album ‘Gebeyn aller Verdammten’, an upbeat album full of raw synths combined with film score-like orchestrations. “For the world is Hell, and men are on one hand the tormented souls and on the other the devils in it.” – Arthur Schopenhauer, taken from the song ‘Judas’.

These words define Schwarzblut’s new album ‘Gebeyn allerVerdammten’ (Eng: Bones of the damned). On this 3rd album the band amplifies man’s eternal enticement to sin and wickedness. Each song gives the listener a view on one of the ‘Peccatum mortiferum’ (Eng: cardinal sins). The album includes texts by 17th, 18th and 19th century poets and philosophers such as Arthur Schopenhauer (1788-1860), Friedrich Theodor Vischer (1807-1887) and Moritz Graf von Strachwitz (1822-1847). Despite being their most up-tempo album ever, ‘Gebeyn aller Verdammten’ features the band’s most prominent classical arrangements to date.

Kapellmeister Carsten Altena gave every song a striking film score-like orchestration. From the beat driven cello of ‘Wer vom Ziel nicht Weiß’, to the Wagnerian horns of ‘Bisaufs Blut’, to the marching percussion of ‘Lied der Rache’.Every sin sounds as big as the other, with guest musicians providing cello and percussion to add to the lively feel of the music. The angelic voice ofAngèlika and harsh vocals of Zeon prove an excellent duo in channeling the various emotions.

The album has a particular broad vocal variety, ranging from classical Latin chants on ‘Das Lob der Faulheit’ to grimly whispering on ‘Judas’ and even vocoded voices on ‘Bis aufs Blut’. With ‘Gebeyn aller Verdammten’ Schwarzblut shows an interesting development in their songwriting, choice of lyrics and overall artistic performance. This album is by far their most profound and powerful album. With many tracks fit for the dancefloor, and for those into LAIBACH, BLUTENGEL, SKINNY PUPPY, FRONT LINE ASSEMBLY and DAS ICH. 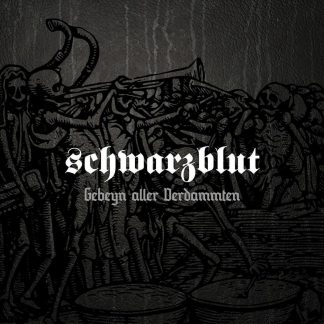