SCHWARZBLUT have always showed their love for historical Germanic poetry, organic electronic music, classical poets and philosophers, as well as Wagnerian orchestrations and craft beers, as can be attested by their impressive repertoire released together with their Alfa Matrix label: the EP ‘Sehlenwolf’ (2009), their debut album ‘Das Mausoleum’ (2010), their sophomore full length ’Maschinenwesen’ (2012), their orchestral heavy album ‘Gebeyn aller Verdammten’ (2014) and the most recent split mini-album ‘Wildes Herz’ (2017) with Hannah Wagner of HELIUM VOLA/SAELDES SANC.

A stunning discography which brought them diversified comparisons to bands like LAIBACH, DAS ICH, BLUTENGEL, SKINNY PUPPY, NACHTMAHR or yet QNTAL.

In 2018, the Dutch combo unleash their 4th studio album “Idisi”, named after a divine female being in Germanic mythology. A tree with deep roots, inspired by lore and legacy. An album that makes you travel in time but also and more than ever before across the world! Still deeply rooted in Germanic and Franconian ancestry, this new opus launches an eastwards exploration into new lyrical and musical territories, rich with sounds and languages from the Old World.

SCHWARZBLUT are so unique in their way of connecting time, geographical orientation and texts with their avant-garde and electronic music arrangements, that it clearly attests the band’s outstanding historical awareness and creativity. The new album features this time texts in a variety of historical European languages such as Middle High German, Lower Franconian, Old Lower Saxon and Old Dutch.

Freedom, identity and the celebration of diversity have always been recurring topics in literature. But what is freedom? The exploration of this question gets translated here into a personal, atmospheric and strong musical statement. Including an adaptation of the classical piece Stabat Mater by Giovanni Battista Pergolesi (1710-1736), a tribute to Vlad III (c. 1428-c.1476) based on a text written during his time of life, and a song in Middle Dutch from the 1540 book ‘Souterliedekens’.

From the opening track ‘Eiris sâzun idisi’, with its powerful First Merseburg Incantation (Old High German, 9th/10th century) giving the song a great rhythmical drive. All the way up to the album’s closing hymn ‘Ghaselen des Dschelal-eddin Rumi’, with its mystique atmosphere set by the 1819 German translation of works by the 13th-century Persian poet Jalal ad-Din Muhammad Rumi (1207-1273), this new “Idisi” album reveals a band who took the luxury of giving time to time… It actually took them some 4 years to complete it, besides the splendid intermezzo collaboration release with SAELDES SANC on last year’s “Wildes Herz” split-album. They took the time to truly connect to each other and the material and concept they were working on: studying the language, life and customs of their ancestors gave the SCHWARZBLUT members valuable insights in their own habits, beliefs and traditions. And by putting all this into music, the band once again hands out a more than valuable testimony.

The new SCHWARZBLUT album also gets released as a limited 2CD box edition with an 8-track bonus disc offering 3 bonus remixes and above all a series of 5 exclusive ‘meditation’ soundtracks made of environmental recordings, audio experiments and vocal intensity carrying the listener inside the Hagia Sophia, at a western European harbor or yet in a morning forest…

Be the first to review “Schwarzblut – Idisi CD” Cancel reply 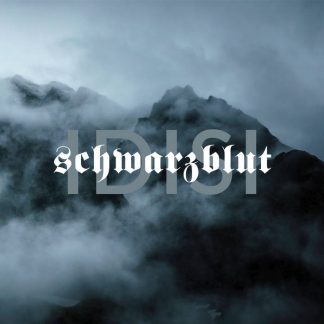