With “The Xenogamous Endeavour”, Antwerp based artist Yves Schelpe decided to make a return to the core of his PSY’AVIAH project, employing total artistic freedom and studio experimentation, writing all the songs on piano first and then only later transposing them into PSY’AVIAH’s characteristic electronic world before searching for the right voice fitting the song and its atmosphere. A creative approach not only reinforcing the personal and almost autobiographical side of this new album, but also reaching the best “cross-pollination” from the numerous refreshing collaborations featured on the album and its unique blend of influential music genres of synthpop, rough electro, trip-hop, ambient, etc.

Similar to the collaborative approach of band projects like DELERIUM, CONJURE ONE or yet FAITHLESS, Yves Schelpe operates as the core-producer/composer with various other talented guest artists joining in to lend their voice or other writing/mixing skills and confirming that PSY’AVIAH stands for open-minded electronic music with energy & soul…

“The Xenogamous Endeavour” is probably the more mature album ever written by PSY’AVIAH in its almost 11 years of existence, offering the perfect balance between highly melodic modern dance pop tunes (“Never Enough”, “Before I Die”, “Long Way”), catchy intimate songs (“Our Common End”, “Broken Failed”, “The Parts You Can’t See”) and more complex and darker tracks (the straight and upbeat “Deliverance” or yet the provocative trip-hop “Get Your Tickets”).

Dancefloor music lovers might even prefer the limited box edition of the album with the second bonus disc offering an astounding trance / house section with radical Trance remakes by M.I.K.E. (Push, Plastic Boy), T.O.M. and Tim Iron. Jan Vervloet (Scoop, Fiocco, Bonzai Channel 01) brings in a fine dance/hard-dance element, and Dizkodude delivers his favorite disco-house with a hard hitting bassline in the middle section. COSMIC ARMCHAIR deliver a eurodance inspired remix. DJ Red Broad makes “On My Mind” into a jazzy/loungy chillout version, as does Maarten Pels with his piano and guitar rework of “Long Way”. Then come the “(in)famous” renditions consisting of other bands making their own cover versions of PSY’AVIAH songs, with this time SCHWARZBLUT for “Before I Die” and RUINED CONFLICT tackling the track “Procedure To Mistrust” in an alluring way evoking some good old VNV NATION reminiscences.. 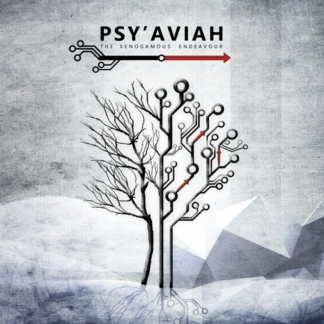