Two years later, the Paris-based combo is busy preparing its new frontal assault with their new CD: “Nuclear”. An album of extreme music strength, atomizing everything on its way in the quest for the ultimate light, for that burning unreachable point at the end of the infinite horizon. Thirteen powerful new tracks, each standing alone on itself and bringing its very own contribution to the album’s sound depth and concept theme.

Revolting metal guitar riffs, raging industrial beats, fast catchy synth sequences and Bonnie’s provocative juvenile filtered female vocals (both in English and French) backed by Seven’s harsher voice make the eclectic universe of KRYSTAL SYSTEM who here deliver one of the best albums ever released by Belgium’s prestigious Alfa Matrix label. “Nuclear” is an album full to the brim with dynamics, grooves, anger and melodies which breathes and transpires a forceful creativity and astounding song-writing maturity; the whole collection of songs benefits from top-notch production work in the prestigious Parisian “Studios d’Or” and is crowned by the sharp mastering work by Swift in London.

Fresh, brilliant, dark, upbeat and heavy, “Nuclear” is a splendid album performed with no compromise but in all simplicity at the crossroad of industrial metal and electro rock. 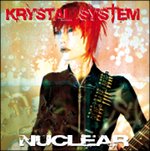