With “Indifference”, Norwegian act ESSENCE OF MIND deliver their 3rd full length album which confirms the band’s sound evolution made of a blend of electro, industrial rock, drum n bass, alternative and pop, always on the edge. The music could be described as a mixture of the 2 previous albums “Insurrection” and “Try and Fail”, but in a brand new wrapping bringing ESSENCE OF MIND closer to bands like PRODIGY, APOPTYGMA BERZERK, ZEREOMANCER, PENDULUM, LINKIN PARK or even COMBICHRIST.

“Indifference is actually ESSENCE OF MIND’s hardest and most emotional album yet, from the hard-hitting “It’s Killing You” , “Retreat” and “Indifference” via the up-tempo and catchy “Some Kind Of Entertainment” and “Scars” to the highly emotional and melancholic tunes “In The Night” and “In Line”.

Sometimes dark, tough and bitter sweet, but always with a hint of hope, this new album deals with fears and emotions, with breaking boundaries, moving ahead in full self-confidence without forgetting the past and without following others blindly… A poignant new album full of potential hits made of strong catchy choruses, fresh melodic synth arrangements, punchy rhythms and a lush and dynamic pop rock feel. 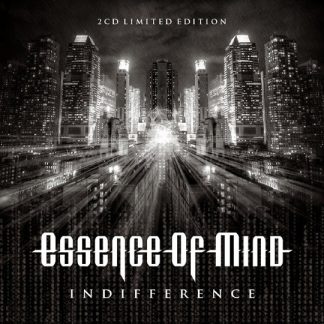