Alfa Matrix has been using the catchline “Electronic Music With Attitude” as their main label slogan for years. Their recent signing from Australia, AVARICE IN AUDIO, are a band that truly embrace the Alfa Matrix mantra, and show expertise in their craft with a unique blend of Synthpop/EDM and Dark Electro stylings. Coming into their own on the successful lead single “Frostbite” released a few months earlier, the full length debut is here in the form of “Shine & Burn”, a mixture of melodic trance and emotional aggression sure to set the world on fire: “Stars exist to Shine & Burn”…

Cold soundscapes, decadent baselines, romantic leads and a beauty and beast style vocal dichotomy between members Jade Pegg & Gerry Hawkins. Gerry’s screaming and frantic vocals directly contrast with Jade’s ethereal operatic vocal style, transforming the songs almost into an emotional war of attrition. The lyrics from Gerry are schizophrenic in delivery and subject, rushing from heartbreak to addiction, to self imposed punishment and struggling with celebrity. While Jade’s delivery comes with the touch of promise, of hope for finer things in the future. Songs like “The Cassandra Complex”, “Bleed As One” & “Punished” show what the two are capable of, delivering a new style hybrid of genres together to make something catchy, thought provoking and danceable.

Evoking comparisons to AYRIA, GRENDEL, L’AME IMMORTELLE or yet ASHBURY HEIGHTS and using the modern production styling of bands like NERO, AESTHETIC PERFECTION & VNV NATION is what AVARICE IN AUDIO deliver, a ultimate sonic experience rarely heard on a debut album naming them as candidate newcomer of the year on electro land?

The deluxe double-CD carton box edition of the album is augmented with remixes from huge names like C-LEKKTOR, ASSEMBLAGE 23, ∆AIMON, NITRO/NOISE, STUDIO-X and many more delivering their personal swings to the AIA sound. 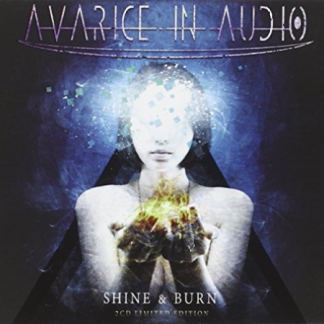