A special fan-pack has been prepared for the new Aiboforcen album. The 2CD box comes augmented with 4 signed exclusive cards inserted in  a special black envelope. This unique Aiboforcen gem is retracing the band’s last 4 albums on Alfa Matrix and will be included in the first 50 orders of the new “Sense & Nonsense” album placed via the official Alfa Matrix webstore.

Still mostly centered today around the intriguing personality of mastermind Benoit Blanchart and the enigmatic female singer Patrice Synthea (REGENERATOR lead singer), AIBOFORCEN once again could not resist collaborating with an impressive and more than promising list of special guests on this album!

Starting straight into it with what could be AIBOFORCEN’s best song ever, the poignant and electric “We Woke Up The Dragon” features the extraordinary vocal talent of Jean-Luc De Meyer (FRONT 242, 32CRASH, UNDERVIEWER, etc.) who lends his unique voice on not less than 3 songs on this album, including a surprising upbeat EBM cover version of FRONT 242’s “Loud” and the more atmospheric and darkish “The Arrival”. Other noticeable appearance comes from Damasius of label mates MONDTRÄUME for a catchy melancholic future pop track. Besides 2 lingering noir pop songs beautifully fitting the highly expressive and emotional voice of Mari Kattman, AIBOFORCEN also take a harsher and more aggressive road through uncompromising powerful collaborations with MILDREDA, VENAL FLESH and KANT KINO.

All in all, AIBOFORCEN remain faithful to their characteristic mixture of low-tempo complex dark eletro arrangements with straighter modern up-beat synth- / body-pop songs. A melange which appears to be more than efficient when we consider that the band manages here to follow a meticulous artistic conceptual red line around contradiction, sense and nonsense while aligning such diverse songs as the oppressive “We Woke Up The Dragons”, the future pop club hit “Come Clean” featuring Patrice Synthea at her best and especially on the moody dark trip hop “Tears”.

The limited edition of the album comes out with a 13-track bonus disc entitled “An End Unto Itself” revealing some 3 exclusive non-album tracks including guest vocals by JUNKSISTA and LOVELORN DOLLS front-girls, plus own reinterpretations of 3 other album songs. Add to this the amazing remix works by selected artists in the likes of Daniel B. PROTHESE, DIFFUZION, IMPLANT, AESTHETISCHE, NEIKKA RPM, PSY’AVIAH and KILMARTH. 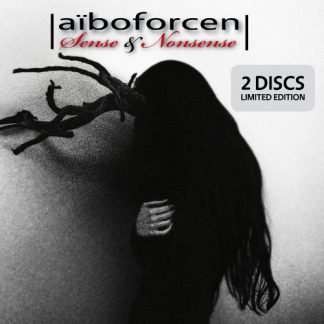