Since their highly praised return to the forefront of the industrial EBM scene with the”Powerswitch” album, renown Brazilian artists Fab Viscardi and Gui Pires (ex-AGHAST VIEW) have shown to be omnipresent on electro club dancefloors, release after release, remix after remix with their new band project AESTHETISCHE. Today their second album “HybridCore” instantly grasps you with a full-force electronic blend, keeping the club-oriented path ignited with layers of EBM, trance, electro and other influences.

Eleven new tracks crafted to hit hard but with a refined melodic touch, and which bring their trademark blend of progressive and modern electronic sound approach while keeping their song-structures embedded in their EBM-rooted background. The new AESTHETISCHE album also features the exciting participation of female American singer Mari Kattman (DAY TWELVE) and German artist Diana S. (JUNKSISTA) who both add an ecstatic sensual touch to the more catchy edgy dance oriented songs of the album which beautifully balance the harder tracks in the line of the previous Amplitude Zero/Statement EP.

Be the first to review “Aesthetische – HybridCore 2CD” Cancel reply 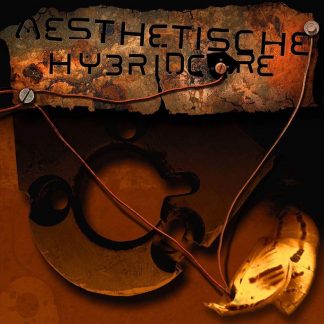