Nadine “Cooraz” Engel (also known for her work with ACYLUM and TOTEM OBSCURA) took many by surprise with the extreme brutality and power of her “Freakshow” debut album. Today, the German artist brings AENGELDUST to the next level with “Agent Orange”!

Rising from her uncompromising roots of strict industrial noise, AENGELDUST adds structure in her compositions and injects harsh elektro layers and heavy provocative samples to make her work progress more towards bands like early-DIVE, FEINDFLUG or yet DIOXYDE. Adding this way some kind of hypnotic noise melodic sequences and viral synths layers to her “AK47 industrial sounds” à la SONAR versus MARITA SCHRECK. “Agent Orange” is there to atomize all underground clubs playing merciless industrial tunes to their dislocating masochistic audience. Oppressive vocal samples (mostly in German) reinforce the dense atmosphere of the songs while the hammering beats keep on marching till the edge of the “endzeit” world. The machine noises act like electro shocks and trigger an overwhelming sensation of contradictory neural reactions intensifying the addiction to these alien mesmerizing tunes. AENGELDUST is harsh industrial noize to play at maximum volume.  AENGELDUST is not for the fainthearted and requires parental advisory.

The underworld bitch is back once again with her sonic army to blow up your industrial standards at full blast… Enjoy the kick! 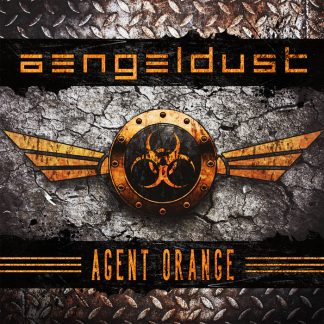