XMH – In your face CD

Their recent strong 4-track EP “The Business” absolutely made us want to hear more from XMH’s new chemistry of sounds! Well, they now throw their 4th studio release “In Your Face”! While opening songs like “The Business” and “Product” strongly confirm the Dutch band’s characteristic aggrotech assaults of uptempo harsh elektro, this new album quickly reveals that XMH has reached the next level with a more mature and polished production work thanks also to the helping experienced pair of ears of producer Len Lemeire (IMPLANT, 32CRASH, UNTER NULL, DUNKELWERK, ANNE CLARK, etc.), but also with the intelligent addition of carrying refined virulent melodies reinforced by female backing vocals from Isa Garcia perfectly matching with Benjamin Samson’s powerful growls.

“In Your Face” adds diversity and grandeur to the successful repertoire of XMH. While remaining faithful to their characteristic trademark sound, they also show they can shine on more downtempo trance and future-pop influenced songs like “Great And Unfortunate Things” or the poignant and almost orchestral and menacing “Falling Technology”. This said, XMH’s growing songwriting maturity will surely not deceive the harsh elektro crowds since their sonic mission remains unchanged: inflicting angry hours to defenseless dancefloors! And they are armed with a bunch of potential new club hits full of strong ripping basslines and hammering beats: check songs like “The Blind”, “Snakes”, “Product” or yet “The Business” which all attest that XMH have overrun the barricades to grab you by the throat… 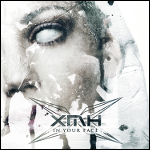 You're viewing: XMH – In your face CD €11,99
Add to cart
Manage Cookie Consent
We use cookies to optimize our website and our service.
Manage options Manage services Manage vendors Read more about these purposes
Preferences
{title} {title} {title}