How strong can VIRGINS O.R PIGEONS’ manifesto be after several years of deadly silence? Well…when a band survived a devastating fire of their home-studio in which they lost a complete album, some radical changes in their line-up, a difficult socio-economic landscape in their Greek homeland, and beyond, it can only mean that the VIRGINS O.R PIGEONS entity has a strong and firm core concept which allowed its current members to face all these challenges of life and to come out with an impressive sound evolution and production maturity that will make you forget the long wait since the release of the “Place No Reliance” album. Literally rising from their ashes, VIRGINS O.R PIGEONS reveal today a totally revamped sound approach, not being afraid to create something totally new on the side-line of the industrial / EBM genre.

New drummer Miyuki’s influence is clearly seen, giving the album that special “live” and dynamic feel. The meticulous attention placed in the production of this album is also a mega plus with Pierrot’s experienced ears giving lots of space to experimentation while keeping the band’s alternative attitude intact. We discover more complex rhythm patterns, evolving sounds and a clear focus on the vocal parts giving the album diversity and uniformity at the same time.

VIRGINS O.R PIGEONS call out loud for freedom, change and spiritual revolution on the angry “Gotta Get Mad”, the punchy “Time To Die”, the exploding and depressive club single “Bleed To Lead” or yet the groovy and bitter “Enemy Ghost”. While the Greek band will clearly attract fans of bands like :WUMPSCUT:, PROJECT PITCHFORK, COMBICHRIST, etc. with their harshest angry songs (the hellish “Versus Christus”, the aggressive and revolted “Bordello” or yet the dancefloor classics “Born In Sin” and “Gotta Get Mad”), they also consistently have that characteristic solid pop structure in their songs with catchy melodic synth-lines and versatile energetic vocals which can also please the more DEPECHE MODE-oriented fanbase (“Done With You”, the elegant “Bio Psycho Social” and the dreamy atmosphere of “In My Head”). Fierce, open-minded, bitter and sweet, VIRGINS O.R PIGEONS offer you a high-energy dark industrial sound with strong colorful pop melodies and provocative powerful vocals on what is bound to become a classic album in its genre… Let them drive you insane: perfection always requires a good dose of madness… 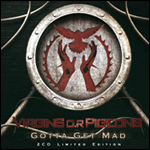