New York diva-fronted act NEIKKA RPM emerges once again out of the blue from the depths of the underground. And just like every of the previous studio albums, “Scorpion In The Hourglass” brings you face to face with the goddess in your devious dreams…

Across 12 new hard hitting Industrial N’ Beats tracks, NEIKKA RPM write the goth industrial techno soundtrack that plunges us back to their origins when underground club night in New York City felt like the everything, when the night never ended and all senses were ignited. Clubbing was a prominent way of life, a sort of obsession including the intoxicating hangover it can produce… NEIKKA RPM captures the dark scene’s ultimate club night feel with its sexual wildness, its messy world of drama, madness and excess, its glamouring parade of less-than-clothed girls cage-dancing under dizzying strobelights, to earth-shaking basslines and toxic noise beats, lead by the impressive complex force of compelling artists who each contributed to building the unique unpolished and distorted sounds of a devious era.

“”Scorpion In The Hourglass” is a special gift to excite your inner beast, the demon that keeps you awake, the obsession and all its cravings…” whispers Dominique with a mesmerising bewitching tone.

As special bonus for their hardcore fanbase, the physical CD edition of this album includes the previously released digital-only 5-track EP “Battle Scars” including remixes by XOTOX, CUT_OFF SKY and M.O.D. 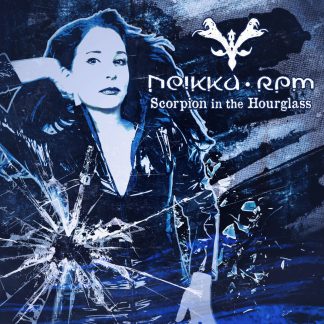