MONDTRÄUME is the creative outlet of 2 Spanish talented artists Pikotto Vond Mond and Damasius Venys who reached an amazing and almost magic symbiosis the day they decided making music together… In only a few years, the duo rapidly caught the attention of concert organizers, released several songs on compilations, and secured a label contract with Belgium’s electronic label Alfa Matrix where they now release their debut album “Empty”. Musically, MONDTRÄUME delivers modern synth pop with a strong club appeal, carrying electronic sequences and lush melodic choruses led by Damasius’ characteristic voice that adds a unique emotional touch of romance and despair to the compositions.

They plunge you into a schizophrenic universe of hope and despair, where sadness and profound thoughts eventually bring you onto the path towards light and magic. It’s easy to see why they often get compared to artists in the likes of WOLFSHEIM, NAMNAMBULU, DIORAMA, MELOTRON, MESH or yet BEBORN BETON. Through the depth of their songs’ atmosphere, their poignant echoing piano strings, their edgy electro-beats and highly emotional vocals, you sing along in no time, shines a strong sense for melody and songwriting maturity that few bands manage to reach on a debut album like “Empty”.

Besides the more upbeat songs like their recent single “Life Is Short”, the tortured “Parasite” or yet the synth pop pearl “Far From Pain” and its beautiful male/female vocal contrasts, MONDTRÄUME also excel on moving low-tempo songs like the poignant “Empty” or the very emotional and personal ballad “New Life” in which we even hear samples of Pikotto’s newborn baby… A band to discover urgently!

Be the first to review “Mondträume – Empty CD” Cancel reply 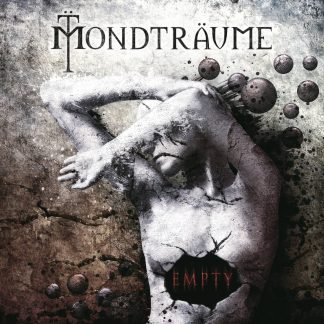