The wait is over! Belgium’s very own vintage techno pop fame METROLAND start the countdown with their new single “4”. “4”, as in the number, is also a global title available in over 7000 different spoken languages worldwide! “4” is not only the precursor to their new album acting as the first of an announced series of 4 singles in total…

Unlike any other previous METROLAND release, ‘4’ in its original form is a 20-minute song where the same arrangement is reworked 4 times, neatly tied together as one complete song. While the B-side holds two 6-minute-plus versions subtitled “countdown a” and “countdown s”. This new 12-inch release of course combines the typical METROLAND darker bass sounds with their trademark bleeps and analogue sequences. A guaranteed sonic delight for all lovers of vintage synth music with an edge and other “KRAFTWERK & co” amateurs.

“4” sets the very first step to the new concept our two Belgian electronic artists (Passenger A and Passenger S) have been working on over the past 4 years.

This exclusive 12-inch vinyl comes out in two different colours (solid red & transparent crystal), each strictly limited to 150 copies worldwide and is part of a special vinyl series marketed by the Alfa Matrix label for the occasion of their 20th anniversary. 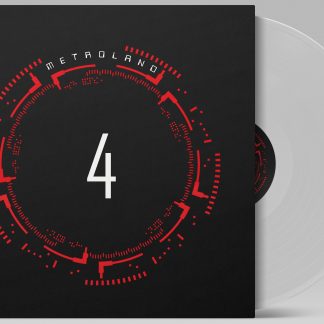