With his new studio album “Arrange The Molecule”, Gary Dassing confirms the undisputed MENTALLO & THE FIXER’s sound singularity. The American artist once again locked himself in his bunker studio morphing himself into an extraordinary sound research alchemist, some kind of modern age shaman using his machines to push the listeners to their ultimate limits.

With its title taken from the line “Blessed Art Thou Who Arrange the Molecule”, this album is an open piece of art built on spiritual / scientific analogies, leaving the listener to choose how to perceive it.
While its predecessor “Music From The Eather” already was a more than ear-challenging sonic experience full of mind-boggling multi-layered synth sequences set on devastating upbeat rhythm patterns and haunting samples, this new opus is even more complex but also more structured in its arrangements.
“I feel for the time being, with “Arrange The Molecule”, I’ve sorta topped out with the crazy ear candy”, says Gary Dassing when describing his new album. “It’s my approach to try and ping as many frequencies across the spectrum as possible, and get this dense full sound, with a lot of movement in the stereo field. … I just want people to trip out on it, I don’t expect fans to like every piece I do, u love some of it and u don’t, it’s just music, fxxk it’s not going to change the world in any major capacity, play it to freak your friends out, get a laugh out of it. Use the music as your drug!”.

The new MENTALLO album is aptly qualified as “Industrial Fusion” by the artist himself. And even if it’s as rhythmic and crazy as ever, this heavy release has more melody and structure than the previous two albums, creating some kind of controlled chaotic noise world dominated by a production level that literally blows you away! It reveals the matchless and absolute production skills of Gary Dassing, a veteran on the electro industrial scene, seen by many as a unique reference and influence, together with his brother Dwayne. This album also reminds us that Gary is before all a trained drummer & percussionist, giving him the impressive ability to make his drums and rhythmical patterns programming sound like a machine or like a human at wish or just mix it up, creating an original mix of electronic and acoustic sounds.

It is simply amazing how such an influential band with an impressive career and expanding discography still dares challenging himself album after album by totally reinventing his sound instead of rehashing the easy recipe of success. Gary Dassing always enjoyed wandering out of his comfort zone to some capacity and this makes MENTALLO & THE FIXER stand out as unique and unrivalled in his underground genre cos he has no set template to follow…

The new pieces on “Arrange The Molecule” are controlled and meticulously thought-out random sound sculptures which offer you a way of escape to another dimension, a way to get lost in an endless hypnotic dark soundscape… It is a structured masterpiece of stereo ear candy full of ultra-vibrating energy!  Nothing is off limits with MENTALLO & THE FIXER.

Restricted to trained ears and fans of the likes of SKINNY PUPPY, DOWNLOAD, Uwe Schmidt, etc. Let music be your medicine but be cautious using this molecule!

Good to know: The album also comes out as a limited edition in a hand-made arty carton packaging with a bonus disc full of remixes, medleys, unreleased/b side material, a bonus ticket to another journey into the unknown… 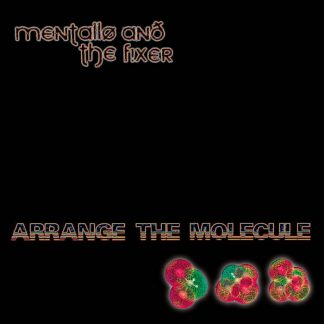 You're viewing: Mentallo & The Fixer – Arrange The Molecule CD €11,99
Add to cart
Manage Cookie Consent
We use cookies to optimize our website and our service.
Manage options Manage services Manage vendors Read more about these purposes
Preferences
{title} {title} {title}