In 2007 the talented electronic musician Kai Otte and renown female singer Marion Aseema Küchenmeister started their new band: MARI CHROME. Their debut-album “Georgy#11811” was inspired by the cult sci-fi movie “Metropolis” and is now about to be released by Alfa Matrix this spring 2012! Produced by John Fryer (DEPECHE MODE, HIM, NINE INCH NAILS, SKINNY PUPPY, etc.), this project showcases the unmatchable voice of INVISIBLE LIMITS singer (one of the most successful German electro-wave acts of the eighties) and the catchy powerful electro arrangements of Kai Otte.

The powerful E-Guitar on some songs was recorded by guest musician Chai Deveraux (JESUS ON EXTASY). With songs in English and German, MARI CHROME offers a fresh mixture of solid EBM, melodic trance synths, dark atmospheres and strong emotional vocals. It’s dark electro pop music with an edge like no-one is playing it today! 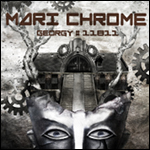