Since the release of their highly acclaimed debut album “House Of Wonders”, Brussels based act LOVELORN DOLLS have teased our hungry ears with the catchy pop rock single “The Thrill” and its electronic dynamics and trashy guitars both perfectly carrying the female singer’s highly expressive and characteristic voice. Today the Belgian band strikes back with their new album which was mixed and produced in Roma – Italy by maXX from the infamous cult band HELALYN FLOWERS! With “Japanese Robot Invasion”, LOVELORN DOLLS reveal a much more focused type sound and mature song-writing approach.

The overall force and dynamic of the new songs perfectly reinforce the contrasts between their so characteristic haunting dark atmospheres, the catchiness of their straight electro rock melodies and carrying choruses you sing along to in no time. Just like on “House Of Wonders”, Ladyhell’s spelling binding voice rapidly hypnotizes you and plunges you into the magic and fantasy world of the LOVELORN DOLLS where we move from one sombre frightening place to another room full of light and hope, never knowing what comes next. She helps us to explore people’s dark sides from various perspectives: from addiction to violence on their new radio hit “Happy Valentine” to the vampire seduction of goth rock song “Long Awaited Kiss”, from the technology dominated spectre of the fast-paced futuristic cut “Japanese Robot Invasion” to the more serious and depressive theme of the cancer disease of the very touching and moody “Curse Of The Crab”, from the ecstatic and revolting call to party on the hi-energy pop-rock hit “The Thrill,” to the almost cliché vampire goth rock of “Blood Moon”.

A very diverse album full of creatures and catchy tunes with an electro rock edge, which rolls in the ears like a beautiful collection of noir short stories… A second full length album soars to top with the splendid opening song “Happy Valentine”, the unavoidable previous single “The Thrill”, but also on an energetic electro pop cover of THE CURE’s unique classic “Just Like Heaven”, the moody dark wave “Miss Friday Night” or yet the very sentimental trip-hop ballad “Jasmina”. A magnificent album that will confirm the band’s fast ascension on the electro rock scene and that comes highly recommended to the fans of GARBAGE, LACUNA COIL, THE BIRTHDAY MASSACRE, EVANESCENCE, WITHIN TEMPTATION and other female fronted electro goth metal bands… 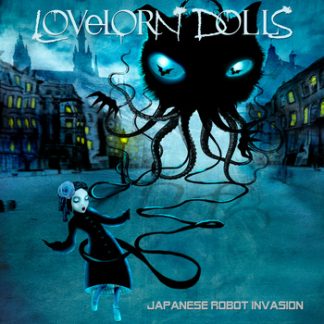