On November 13th 2007, Danish electronic industrial artist Claus Larsen turns 40. We could not find a better date to launch the first volume of LEAETHER STRIP “Retention” box series through which Claus Larsen will re-release his complete back-catalogue. Each re-release will have both the fully remastered version of the original album on disc 1 and on the second disc, a totally rewritten and reinterpretation of some selected songs from the original album by LEAETHER STRIP himself rerecorded with current technologies.

Initially released back in 1990, the first milestone of a long, prolific and still boiling music career today, “The Pleasure Of Penetration” was LEAETHER STRIP’s debut album which quickly established LEAETHER STRIP as one of the most exciting emerging acts in Europe in the early 90’s and one of the leading acts on the cult Zoth Ommog / Music Research label. Tracks like “Japanese Bodies”, “Razor Blades” or yet “Go fuck your ass off!” instantly imposed the “LEAETHER STRIP” trademark” renown for its punishing rhythm pace and aggressive electronic style with distorted vocals.

The “Retention nr1” box includes 2 complementary albums: first of which is the “The Pleasure Of Penetration” LP remastered by Claus Larsen himself, giving a stronger and wider sound to this chef d’oeuvre while staying very faithful to the original work. The original track-list has also been extended to 15 tracks with the addition of early 12″ tracks and other rarities of the period. Secondly, comes the “Pleasure Of Reproduction 2007” LP which gathers some 10 selected tracks taken from disc one, totally re-written and re-recorded by LEAETHER STRIP in the 2007 upgraded Strip Farm studio, benefiting from today’s technologies and Claus Larsen’s acquired expertise through the years. 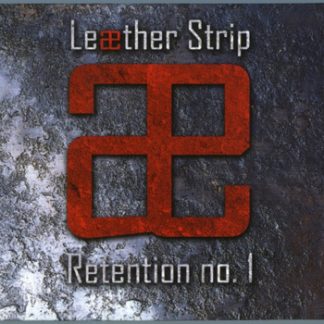