With two strong and highly praised albums (“Underground” and “Nuclear”), French duo KRYSTAL SYSTEM found their place in the spotlight on the indie rock scene across Europe and also overseas from Japan to the USA. With “Rage”, they return and hit hard again, setting the production bar even higher!

Once again produced in the prestigious Parisian “Studios d’Or” and mastered by the highly-skilled Swift team in London, “Rage” reveals such intense songwriting effort that result in a relentless sonic assault of so many potential hit songs that it kind of makes your head spin… This is a radical chef d’oeuvre full to the brim with dynamics, grooves, sound experiments, anger and melodies which breathes and transpires a forceful creativity and astounding songwriting maturity that will undoubtedly receive a resonating echo from music journalists and DJ’s worldwide and will certainly be a contender for the best album made in France in 2013!

“Rage” is the uncompromising soundtrack of urban warriors on a holy quest for their roots, fighting for the truth in a suffocating post-modern world contaminated by mental disease. Loud and rough indie rock guitars filtered through artisan fx and mutated into a wall of noise combined with straight ripping electronic bass lines and radical synth arrangements. Electric versus electronic. “Rage” is dominated by seducing contrasting harsh male and filtered female vocals. A unique blend of styles confirming that KRYSTAL SYSTEM creates their unique and characteristic sound design.

On this 3rd album, Paris-based duo KRYSTAL SYSTEM shout their “Rage” loud and proud, and focus their fight on the self-destructive human race suffering from mental weakness and living an artificial life instead of fighting their inner war… This is an anti-fake propaganda campaign! Consume at full blast without moderation – your neighbors will love it!

Cherry on the cake, the visual aesthetic signed by French designer Valdor turns the physical release of “Rage” into a true collector item! 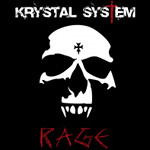