IMJUDAS is the solo project of Italian artist Maxx Maryan, founding member and male half of cult electro metal duo HELALYN FLOWERS. Started as a noir dyed electro pop project back in 2016, IMJUDAS has gradually dressed up and re-appropriated a rough guitar component, thus expressing a binary characteristic of his musical roots: the decadence and melancholy of the electronic dark wave and the abrasiveness of the most primordial rock against the backdrop of a promiscuous dance floor.

IMJUDAS excels in playing with contrasts and enjoys betraying the catchiness of his synthetic lines by interrupting them with sharp incisive guitar riffs or plaintive loud vocals, while other catchy and highly addictive choruses set his more disturbing and almost chaotic songs in an almost angelic wafting cocoon. IMJUDAS personifies that necessary evil we all wear on our left shoulder and who brings us into that so comfortable moonlight shadow. With this stunning album, IMJUDAS serves us absolute Punk Wave for abandoned souls in amusement parks where the loud and noisy stereo could play cult 80’s songs from KILLING JOKE, DEPECHE MODE, GARY NUMAN, THE CLASH or yet PROPAGANDA to set the tone.

Deeply rooted in the imagery and aesthetics of the New Wave movement, in the transformation of David Bowie and in the gender-bender attitude of Pete Burns and Boy George, in the grotesque-sensual limitation of Marilyn Manson, IMJUDAS declares itself “Man, Woman and Animal at the same time!”.

Conceptually based on inner sense of alienation, appealing surrealistic and esoteric themes, this “Yrjudas” album shines by its shimmering inner darkness and plunges you into tearful melancholy with its entertaining light melodies. From the obsessive beat and dark menacing guitars of “Outcast” to the romantic bittersweet rock-wave ballad “So Untrue” through the tragic love-song “Lost Boy” or the helter skelter flavor of “There’s A Stranger In Your House”, IMJUDAS unfolds such a highly impacting emotionally charged debut that it can’t leave you unaffected.

The first pressing of this album is a limited double-CD digipak holding the bonus album “Via Negativa” by Maxx Maryan’s pre-IMJUDAS summoning project BLACK SHINE FEVER, some sort of dark goth rock satellite project reminiscent of both CHRISTIAN DEATH and legends of death metal like Quorthon and his unmatched BATHORY. This high-energy 12-tracker “Via Negativa” is caustic, obscure, almost frenetic and stylishly explains where IMJUDAS is coming from and heading to: it is burning dark wave on the verge of neural collapse.

An uplifting sonic experience from its unconscious genesis to its twisted present and potential dystopian future! ImJudas and YouAreToo… 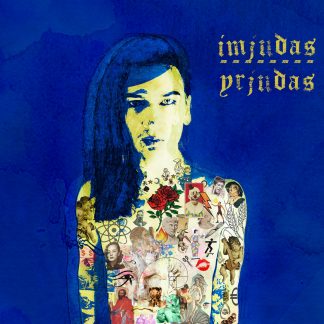