For the celebration of their 35th anniversary year of existence in 2016, Belgian electronic music pioneers FRONT 242 decided to re-release several of their albums together with Alfa Matrix, their partner in crime over the last 15 years now… These remastered versions showcase FRONT 242’s innovative and unmatched sound in the best audio quality made possible by today’s audio technology.

Just like they did it back in 2004 with “Geography”, FRONT 242 now re-release their second classic release “No Comment + Politics Of Pressure” on CD digipak format with the original album design in a fully remastered version by Daniel B.

“No Comment” and “Politics Of Pressure” were originally released in 1984 and 1985, at a moment when FRONT 242 reached its full force line-up made of Daniel B., Patrick Codenys, Jean-Luc De Meyer and Richard “23” Jonckheere; and really started attracting true cult-following. They had become the solid leaders of the newly born “electronic body music” movement in reference to their high-tech and hard edged electronic punk dance music. They were also shaping their today cult image as a high energetic powerful live-act dressed in military outfits ready to conquer the world and become one of the most popular underground bands for the many years to follow…

Songs like the new hits ”No Shuffle”, “Commando Mix” or yet ”Funkhadafi” definitely cemented their reputation as the leaders of cutting edge of the experimental industrial dance scene, combining political sound samples, heavy sequencing and aggressive electro beats. Just like their lead singer Jean-Luc De Meyer once explained it: “We don’t want to say anything to the people. We just take samples from the world around us, the news, television, movies, the street…We act as a reflection of what’s happening and what’s interesting in the world.”… FRONT 242’s music was never created as a way to convey a message, but rather serve as an artistic observation of things around all of us!

Since day one, FRONT 242 have always been employing the use of the most current technology available to keep their music fresh, groundbreaking and up to date, non-stop pushing their sound to its logical extreme. The unique cold and synthetic brand of electronic dance music displayed on “No Comment” and “Politics Of Pressure” instantly became the band’s signature sound for the following decades… It’s a true sensational pleasure for the ears rediscovering these great classic tunes in their fully remastered versions, reminding us how this second album firmly placed the group as a major driving force of electronic music for the many years to follow. 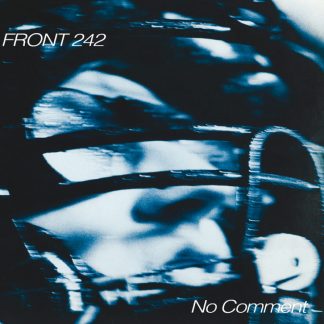 You're viewing: Front 242 – No Comment / Politics Of Pressure CD €11,99
Add to cart
Manage Cookie Consent
We use cookies to optimize our website and our service.
Manage options Manage services Manage vendors Read more about these purposes
Preferences
{title} {title} {title}