After 5 long years of ceasefire, the DUNKELWERK U-boat surfaces again on the horizon for another Endzeit Elektro assault. During the last years we have seen other Endzeit fortresses collapse and vanish from the Earth like :WUMPSCUT: and THE RETROSIC. Anno 2019, the one-man army of DUNKELWERK stands up strong and is determined to defend the dark flagship of the good old German endzeit electro genre. With his 4th studio album “Waffengang”, Losttrooper gives pure evidence that Endzeit is still alive and kicking! The electrobeats are solid and heavy, the soundscapes are noir and dusty, the synth melodies are vicious and intoxicating, the vocals are strict, massive, and brilliantly merge with the recurrent and oppressive speech-samples from the wartimes… “Waffengang” triggers cinematic atmospheres and creates a wartime movie in your head bringing you song after song into special moments of loss and defeat. We experience war moments through the eyes of children on the heartbreaking song “Pulverland” (with stunning use of elements of the German nursery rhyme “Maikäfer flieg”; we end up on the battlefield again and its countless dying soldiers and horses with “Holterdiepolter” while “Der Kommandant” throws us back in the icy tormented dark sea for another beloved U-boat song and dancefloor stomper! Just take a deep breath when the diesel engine stops! If “GxSTxPx 4c” deals with all these voices who dared standing up against the unjust Nazi state and got locked in prisons by the German Gestapo, “Josef Ritter von Gadolla” depicts the execution of the commandant of the German city of Gotha who disobeyed by capitulating in front of the marching American army in the last days of WW2. While the song “Battlefield” is about the well-known multiplayer first person shooter series, “Wolkenschloss” is a stomper which might give some hints how the DUNKELWERK bunker looks like… who knows?

Just take your headphones, choose a silent dark hour in the end of the day, sit down and get lost in the chaos and defeat that DUNKELWERK exhales second after second. “Waffengang” is not just a collection of 11 dark electro songs, this is a manifesto holding 11 strong and clear statements against war.

Endzeit with attitude! As always. Trust!

The album is released as a special digi-sleeve packaging with extended booklet including all German lyrics. Grab it before the times of physical releases are over?

Be the first to review “Dunkelwerk – Waffengang CD” Cancel reply 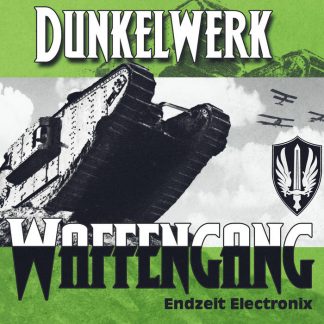