Losttrooper returns on the battlefield for the ultimate “Operation: Duesterland” – DUNKELWERK’s 3rd conceptual full-length album celebrating once more the complex theme of “Total Defeat” and making of this collection of songs one of the strongest anti-war albums this scene has to offer! If many bands have used war elements in their work, not many deal with this difficult theme wholeheartedly like DUNKELWERK can do it!

By listening to “Operation: Duesterland” you can join a nation which was in a nosedive into the depths of hell. And please do not expect tales from dark fairylands! DUNKELWERK creates movie-like sceneries at best. World War II was a reality and this fact makes this new album very disturbing… It´s about defeat, not about victory! Defeats and ruins: Endzeit Electro with an attitude and deep emotions. This album is the result of intensive research work for rare original German war broadcast recordings making DUNKELWERK sound more authentic than ever before!

Songs like “Bissige Kröte”, “Flamingo” or yet “321tot…”all greatly attest to this. These propaganda samples and lyrics guide this 11-track album whose music can be described as a kind of old school homage to the 90’s electro endzeit sound enriched with some modern elements. As always with DUNKELWERK, melodies take the lead on the wastelands and rhythm the dark soundscapes, the German lyrics/samples and the sorrowful orchestral arrangements. The concept is straight and simple: Endzeit per conviction! And talented German designer Oliver Haecker (Bastart-Worx) conceived a sensational layout and design concept for this release! If you want to join soldiers on their way into defeat and misery you should give DUNKELWERK a listen. 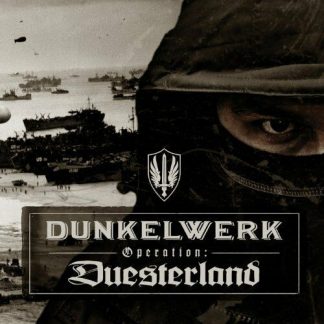